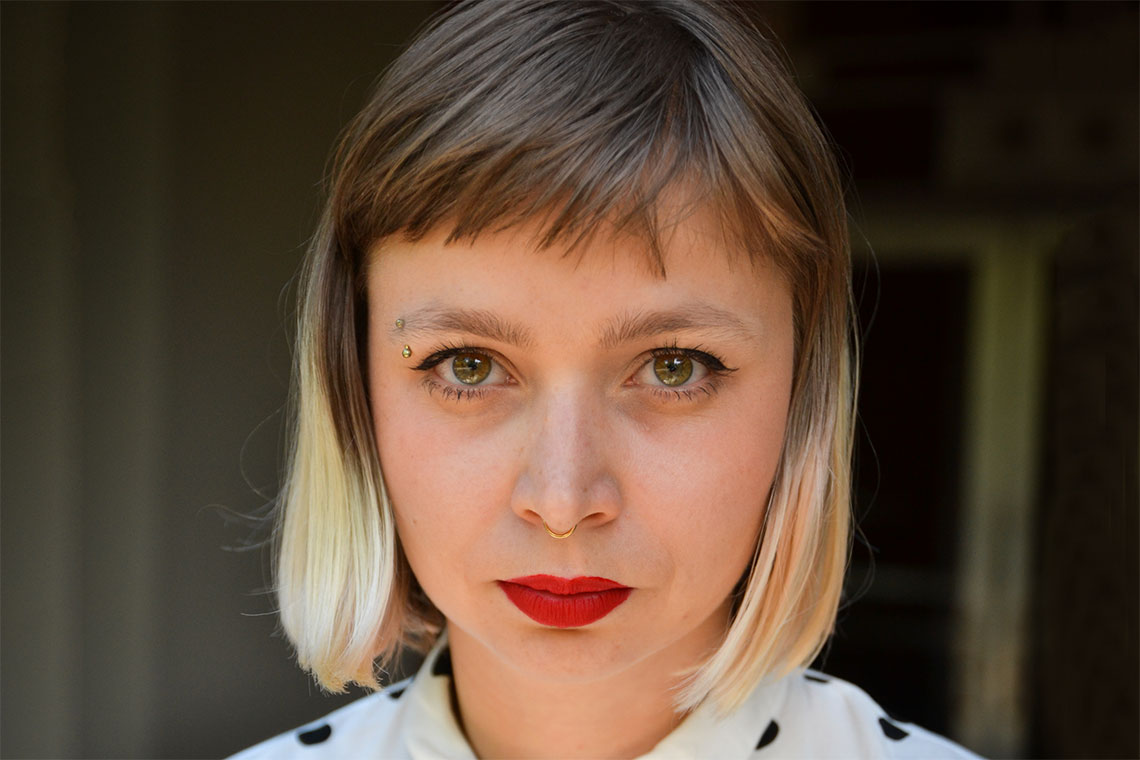 Alice Gosti is a dancer, choreographer and multimedia artist who moved here at age 19 from Perugia, Italy to study at the UW.  She’s Velocity Dance Center’s current Artist in Residence and a director for the Intiman’s Emerging Artist Program. Her celebrated five-hour immersive performance, How to become a partisan, won an Artist Trust Gap Grant and a Seattle Office of Arts and Culture individual project award.

In 2013, Gosti inaugurated the Yellow Fish // Epic Durational Performance Festival, the only festival worldwide dedicated to durational performance. As a performance curator, she’s also been in charge of Modern Dance Behind the Pink Door, Under Constructions (Velocity) and various smaller events in collaboration with the Satori Group and the NEPO 5K Don’t Run.

You can catch Gosti in Fritha Pengelly’s work for the UW dance program’s 50th anniversary celebrationon October 19 and in an excerpt at the Velocity Fall Kick-Off September 24. She is also currently working on two new immersive durational spectacles. Gosti joined me for this week’s installment of Five Friday Questions.

Neil Ferron and Kirt Debique’s new music video that came out on Wednesday, “Tell Me How You Know,” is amazing! An alien dystopia in which the protagonist seems to give his life away to the people he loves, so that they can be happy?! All in this slow motion, gut-wrenching texture, and to Kirt’s amazing voice and lyrics. Amazing. I cannot wait to hear Kirt’s full album.

I recently saw Intiman’s John Baxter is a Switch Hitter, directed by Rosa Joshi and written by Andrew Russell and Ana Brown. Adam Standley and Meme Garcia are amazing, follow them in whatever they do. I will. There is something amazing happening at the Intiman. And it is not only about what you see on the stage, it is a desire to speak about the now, listening to the complexity of this historical time. Dig it.

Overall, the best experience of the year for me was Tim Smith-Stewart’s Awaiting Oblivion… which premiered at On the Boards for their Northwest New Works Festival. So sweet, so sad, so critical, so real. And so much more then that. The best piece of the whole festival. I cannot wait for the evening-length production, which should be happening this year. As somebody who is re-working her political views and accepting the contradictions that being an artist in the US entitles, I felt very nourished and excited about what conversations need to happen in and around the art world.

Also, Out of Sight, a survey of contemporary art in the Pacific Northwest curated by Kirsten Anderson, Sharon Arnold, Greg Lundgren and Sierra Stinson, was an amazing show and event. It is so inspiring to see the energy and the propulsion that Seattle has about creating things.

I was born and raised in Italy, so to me the best meal is that which helps me with my homesickness. Which is linguine alle vongole (or anything) at the Pink Door or pizza at Via Tribunali—I order margherita and ask for a side of arugula. A BLT at Oddfellows is also a staple for me, the first thing I like to have when I come back from traveling outside of the US. Mamnoon has the best take out ever.

When I am sad I listen to The National’s “Sorrow.” On a gray and rainy Seattle day I can enjoy The Smiths. To get pumped up, I can go all over the place. I love some very trashy pop and will most definitely dance around to some top 40, hip-hop and ’90s music. Always will.

“WHY? WHY ARE YOU MAKING WHAT YOU ARE MAKING?” is to me the most crucial element of a production. It’s not that one has to have a concrete, rational answer. That can be understood with a sentence or two. Personally, I just need to know the questions that I am interested in layering in the work. I may very well never find an answer to those questions, or the answers that I find may be completely ineffable.

The second most crucial element of a production is the relationship to the viewers. Artists from all media often forget that they can modify the existing contracts that each art medium has established as default. You can use the process of the creation of the relationship/contract to feed what you make.

What’s the most useful thing anyone’s ever taught you about working in the performing arts?

Always dream big! In my last year in college at UW, Mark Haim mentored me on my thesis. He is a genius.

I was working on a project and at the time I knew I wanted to talk about airports. So I was going the traditional route, I was going to try to have a set that would resemble a plane or an airport and I was going to make a choreography to fit in that.

Then he asked me something on the lines of, “If money wasn’t a problem, how would the piece look in your imagination?” I knew exactly how it looked; it was in an actual airport with real-time travelers as the audience. And that is what it became. For ten days I traveled to four different airports and performed the same piece in each one of them.

The same thing happened with my latest project, How to become a partisan. I had a huge idea. I worked really hard to enable it to be the scale I had imagined it.