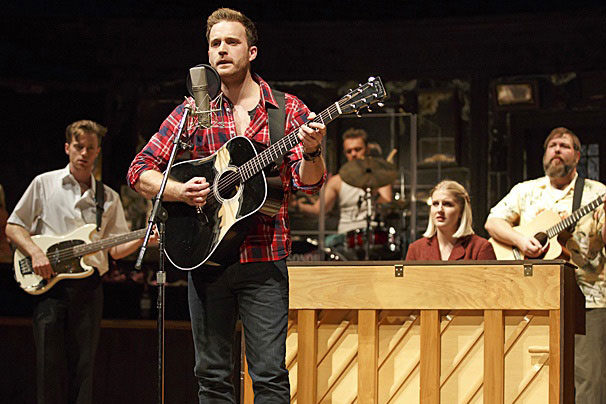 On the streets of Dublin, an Irish musician and Czech immigrant are drawn together by their shared love of music. Once, now showing at the Paramount Theatre, is a theatrical version of the movie that causes peoples’ hearts to swell in 2007 starring real-life musicians Glen Hansard (The Frames) and Marketa Irglova. One of the songs in that film, “Falling Slowly,” won them both an Oscar.

Now, on stage at the Paramount Theatre, Stuart Ward is playing the role Hansard made famous. Ward, who has been in London’s West End in The Recruiting Officer and Dreamboats and Petticoats and was seen on “Downtown Abbey,” trained at Paul McCartney’s Liverpool Institute for Performing Arts. A singer-songwriter, we recently talked to him about his role, his past achievements and Aaron Sorkin.

How complex he is. He’s yearning to burst out of his shell and unleash his talent on the world but just doesn’t know how to. He has major confidence problems.

This one, by far. As soon as I heard the film was becoming a musical I knew I had to do it.

I don’t really have one. I prefer to create new roles when at all possible. There are a lot of Jeff Buckley biopics going on at the moment though. I’m a massive fan, so would love to have a go at playing him in a film or a play.

What’s your favorite stage moment thus far in your career?

I was lucky enough to work at the Donmar in London, which was a massive honor. Probably one of the proudest moments on stage for me.

Who’s your favorite actor you are dying to work with?

My favourite actor is Martin Sheen. I’m a big West Wing fan. They’re all amazing actors on the West Wing though, and I’d  love to work with any of them. I’d also love do anything that Aaron Sorkin has written.

Your favorite place to run your lines?

In my house with as many distractions as possible. Running lines is boring and I tend not to do it. I prefer learning them in the rehearsal room.

Your favorite place to see theatre?

The National Theatre and the Donmar in London. Everything they do is pure gold.