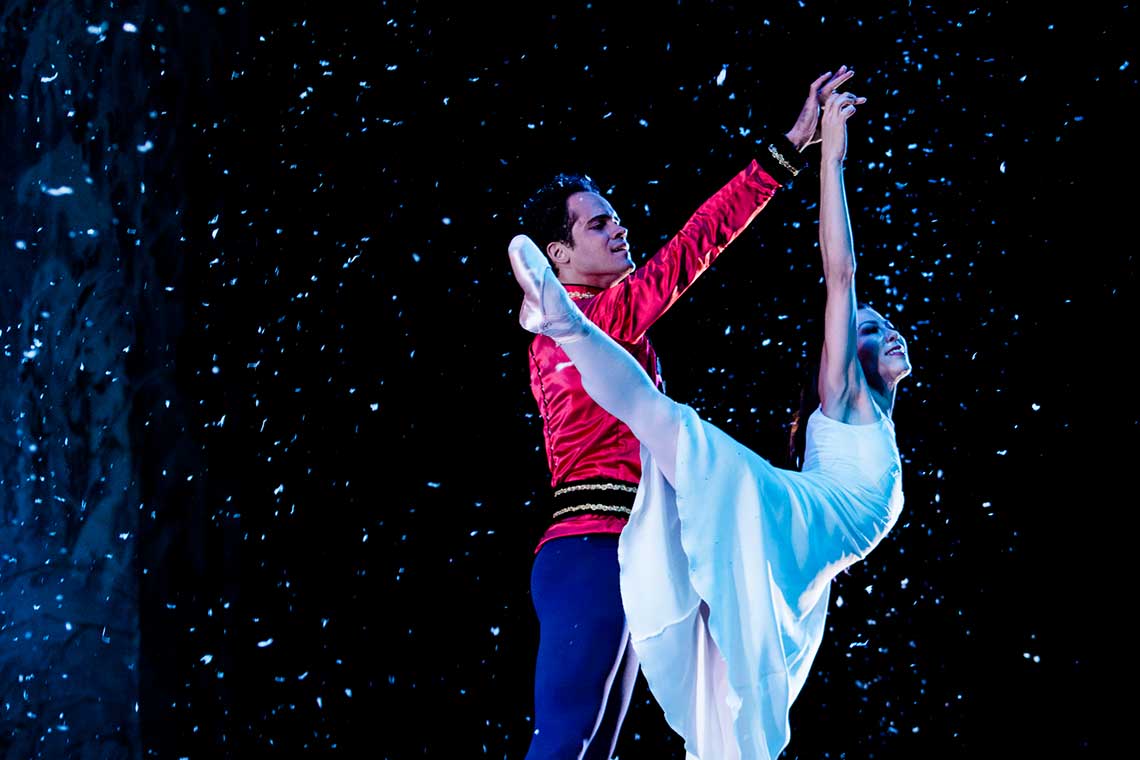 Mara Vinson and Jose Iglesias dance in "The Nutcracker" at Olympic Ballet Theatre. Photo by Into Dust Photography

If it is fair to say that audiences return to the performing arts for meaningful connection, perhaps there is no richer time of year for doing just that than during the holiday season. As days grow shorter, darker, and colder as the end of each year approaches, Seattle stages and performance halls are warm, well-lit, and busy, offering top-tier productions to replenish one’s inner sanctum through the arts of music, dance, and drama.

Particular to every holiday season are the returning shows; those performances and stories that audiences come back to year after year. These are often part of a tradition that began in earliest childhood, and after so many years are still rekindling the holiday spirit. Holiday shows are often family affairs as the tradition is passed on to children and grandchildren.

How do arts organizations in the Seattle area keep their holiday shows fresh and relevant for audiences year after year?

“It’s all in the mindset of the creative team and the artists who approach the show,” said John Langs, Artistic Director at ACT (A Contemporary Theatre) and director of this year’s production of A Christmas Carol. “The theatre is different every night and we as humans are different with each new event we experience. I think the key is to not deny who we are or the events in the world outside as you speak the words of the play but let whatever is moving in you be part of the story you are telling. Use it.” Langs said that the business of bringing the real world and circumstances to bear in serving story in fresh and relevant ways required something of a “spiritual rigor.”

He pointed out that A Christmas Carol, a 47-year tradition at the ACT Theatre in downtown Seattle, is a story of redemption and renewal that takes place at the very end of the calendar year—already a built-in time of reflection. “The power of tradition is strong,” he added. “Many audience members come to A Christmas Carol as their first professional theatre experience. Many of them were brought as children and they are now bringing their grandkids to ‘share the magic.’”

“No two shows are alike, and every cast is different,” said Peter Boal, Artistic Director of Pacific Northwest Ballet (PNB), the company responsible for bringing George Balanchine’s The Nutcracker to audiences every holiday season. “Even the orchestra plays Tchaikovsky’s score slightly differently under the baton of different conductors, or with a new violin soloist. This is the beauty of seeing (and hearing) art in person.” Boal confirmed that PNB, in fact, restages Nutcracker each and every year, teaching each step and interaction from scratch to company dancers and PNB School students. Many dancers and most student dancers are in roles for the very first time, some even experiencing live performance for the first time.

Boal also referenced the role of tradition, and the fact that for many in the audience, this is their first experience seeing a live ballet performance, something he called a “perfect portal for discovery of the world of classical ballet.”

PNB’s isn’t the only long-running Nutcracker in town. Former professional dancers John and Helen Wilkins founded Olympic Ballet Theatre in Edmonds in 1981, and The Nutcracker has been an annual mainstay at Edmonds Centre for the Arts ever since. In 2011, Oleg Gorboulev and Mara Vinson took over the show, teaming up as artistic directors.

“The Nutcracker is a holiday tradition,” said Gorboulev. “We occasionally make choreography changes, or adjust technical aspects, or update the costumes, but [otherwise] not much changes. But on the artistic side we have new dancers each year, and with new dancers, you get fresh energy. I don’t know if the audience notices, but we notice.” He pointed to the working relationship between himself and Vinson as a necessary component of bringing the show back each year. “We work very well together,” he said. “We found our responsibilities, we found us. We found our stride and it has become natural.”

The celebrated Seattle Symphony has proved to be another natural local fixture each season. The Symphony offers a range of returning holiday shows. This year’s Holiday Pops is being led by conductor Stuart Chafetz. “Handel’s Messiah,” features the Seattle Symphony, Chorale and a cast of soloists to honor Handel’s most famous work.

“When it comes to keeping a returning show fresh and relevant,” said Taproot Communications Manager Daytona Danielsen, “part of it comes down to the audience’s delight and a sense of nostalgia.” Taproot Theatre Company, founded in 1976 is Seattle’s largest mid-size theatre company, serving the Pacific Northwest with two performance venues, regular touring programs and Acting Studio. They have regularly returned A Charlie Brown Christmas to the stage at holiday time. “A Charlie Brown Christmas is one of those plays that the audience likes to see repeatedly; children, who make up a significant part of the audience, delight in experiencing a familiar story again and again. And then, children grow up, and new audiences come, experiencing the production for the first time.”

But just as no two pieces of performance art are ever exactly the same twice, no two seasonal calendars in Seattle are exactly the same. Taproot is not presenting A Charlie Brown Christmas this year, but is planning to remount the production in 2023. Instead, the company’s holiday offering this year includes both tradition and newness all at once. The theatre company is staging the Jane Austen-inspired The Wickhams: Christmas at Pemberley, which is a new production, but also a sequel to the play they presented to success in 2018, Miss Bennet: Christmas at Pemberley. The sequel takes place on the same day in a different part of the very same house, promising familiarity, but also freshness, and as the production is recommended for ages 10-plus, plenty of opportunity for shared family experience. Danielsen described Taproot’s fingerprint, whether at Christmas or any other time of the year, as “theatre of hope.”

Whether it is childhood discovery, shared family experiences, or reconnecting to aspects of faith and hope, certainly the holiday season seems to offer what audiences are looking for, and producers and performers in the Seattle area seem to be doing something right.

“There are so many debuts in different roles during the run of The Nutcracker,” said PNB’s Boal, “and the wings are packed with peers who are pulling for their friends as they dance the Soldier, Candy Cane, or Sugar Plum for the first time. Students often dance the company roles, unseen offstage. Honestly, the dancers love Balanchine’s choreography and see each performance as a fresh inspiration. Audiences too feel this sense of excitement and discovery.”

“We understand there are traditions baked into the way we stage A Christmas Carol that are very important to people,” said ACT’s Langs. “There is a beautiful story I was told about a family who lost a family member during the Christmas season. One of their fondest memories was watching their loved one experience a very specific moment of the show when the Ghost of Christmas Present sprinkles the Christmas spirit into the audience via glitter from their golden cup. It was related to me that the joy of this moment was one of the fondest and last memories of being together as a family they shared, and that this family now comes each year to A Christmas Carol to commemorate the loved one who is no longer with them. Whenever I approach that moment in the rehearsal room, I think of them. I often tell this story to the cast. It brings home the power of tradition. There are dozens of different ways to perfume that moment that allows for creativity and breath, but it’s moments like these that make it clear that we are a part of a bigger story that has connected the community for 47 years.”

Where company’s and producers are committed to nurturing the art and performances they shape and re-gift each holiday season, it seems that the “bigger story” will be bringing audiences back for years to come.

David Drury is a Seattle-based writer, journalist, and Best American fiction author whose creative work can be found at daviddruryauthor.com.