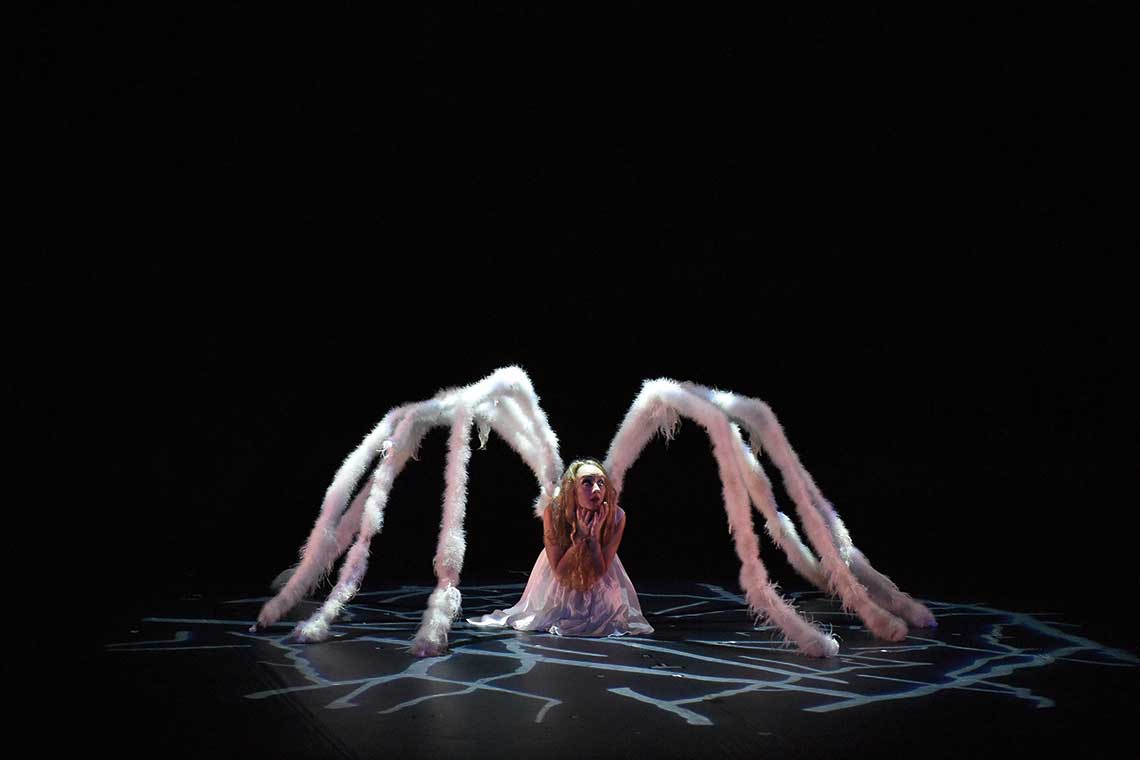 MOMIX's "Alice" will be presented at Meany Center for the Performing Arts May 12–14. Photo by Andrea Chemelli

In the beginning, there was story. Humans would gather around the fire to tell stories: how they came to be and why. The embers would rise into the star-dazzled night.

There are Marvel movies now. They seem to be released every other week or so. Bejeweled with cinema’s finest actors, these stories are now told on screens, some as big as buildings. Others, so small as to be placed into a child’s wayward pocket. The special effects of these movies are tsunamis—a flood of action, light, movement, color. They delight.

In March, Book-It Repertory Theatre is presenting Mrs. Caliban, a play that features a character: Aquarius the Monsterman. A story written by playwright Rachel Ingalls, the show is being directed by award-winning Kelly Kitchens. Adapted by Frances Limoncelli, it tells the tale of Dorothy Caliban and her husband, Fred, two pleasant people living pleasant lives, just so long as you don’t mention the children they’ve lost, and as long as she doesn’t yearn for excitement and passion. What’s exciting is a monsterman appearing at your door.

Mrs. Caliban (running March 23–April 17) is a story fantastic—like the ones told by our ancestors on cave walls and by Hollywood’s latest trendy team—but told on one singular stage in front of one singular audience for one singular moment. “Storytelling,” Torrie McDonald, Book-It’s director of marketing and communication said, “is ancient and primeval. So, the immediacy and impermanence of that shared experience of watching theatre—with no filters, buffers, rewinding or rewatching—pulls at the thread within us that runs straight through the ages.”

That thread of magic—one glittery with fantasy, suspense, and the suspension of disbelief—is being seen in theatre scenes all around Seattle these coming weeks. Book-It’s Mrs. Caliban is a stinging blend of fantasy and domestic politics, showing us the joy of finding ourselves within ourselves. ACT Theatre’s The Thin Place (running March 18–April 10), by Lucas Hnath, and directed by Brandon J. Simmons, cofounder of The Seagull Project, asks: Can we talk to the dead? Can we communicate with loved ones that we have lost? The show is having its West Coast premiere. Meany Center for the Performing Arts will showcase MOMIX’s Alice, a surreal take on Lewis Carroll’s beloved Alice’s Adventures in Wonderland, a surreal children’s book if there ever was one. The production is choreographed by MOMIX’s founder Moses Pendleton.

These shows show how audiences, who have seemingly been entertained by most everything (we are inundated with movies, TV shows, web series, and much more), can still be bewitched, bemused, and bedazzled by the simple act of telling a good story well.

Obie Award-winner Lucas Hnath’s play, The Thin Place, explores a realm not far from any of us: death. But, still, far, indeed. As we slowly march through another season of COVID-19, death is all around us, and yet, we ourselves know nothing of death and what lies beyond our living. In the show, a woman says you can communicate with the dead in that boundary between the here and the hereafter. Is she pulling the wool over our eyes? Or are our eyes finally seeing the truth? Haunting and compelling, Hnath’s ghost story packs a punch, a twisty yarn that won’t easily unravel. “The play, of course, is about that hard to grasp space,” said Simmons, who is directing the production. “But it’s also about the invisible, electric space between the actor and the audience, because she is our storyteller.” Stories: old as time and as fresh as now.

Alice’s Adventures in Wonderland was first published in 1865. The children’s book is literary nonsense with Alice falling through a rabbit hole and into a fantasy world of oddities and odd characters. Fans of the work have been falling for it ever since. There’s an entire industry based on the work with blockbuster movies, TV shows, games and more. MOMIX’s Alice (running May 12–14) is one such work eager to showcase its particular point of view on a piece we all know well.

MOMIX is a dance company based in Connecticut, founded in 1981 by Moses Pendleton. The company presents works that combine acrobatics, dance, gymnastics, props, mime and film in a theatrical setting. “You can see why I think Alice is a natural fit for MOMIX,” Pendleton has stated. It premiered in 2019. “An opportunity to extend our reach. I want to take this show places we haven’t seen in terms of the fusion of dancing, lighting, music, costumes and projected imagery.” Pendleton is a storyteller of movement.

COVID-19 has relegated us all to isolation and our screens for entertainment. Wonderful, to be able to celebrate art still. No matter how isolated we feel, or how long a quarantine may be, there’s still the opportunity to explore art with one another, and find our common humanity in that way. But something has been missing. “Screens don’t give us access to that thin place that lies between two living bodies in space. Theatre does that!” noted Simmons, enthusiastically. “It’s thrilling to present a play that wants to explore that power.”

Whether it’s talking to ghosts, sitting on a mushroom with a hookah-smoking caterpillar, or inviting Aquarius, a gigantic six-foot-seven-inch frog-like creature into one’s home, the power of story is certainly stronger than the power of COVID-19. The power of story is being showcased with great aplomb on stage, curtains drawn back so that audiences can marvel like they’ve marveled for eons, much longer than any Marvel movie franchise. “Theatre,” McDonald said, “Is a un-replicable experience in magic.” Un-replicable—much like each fire from which the first stories were told by. The embers rising in their particular ways to the dark velvet of our dreams.

Mrs. Caliban will play at Book-It Repertory Theatre March 23–April 17; The Thin Place will play at ACT Theatre running March 18–April 10; MOMIX’s Alice will play at Meany Center for the Performing Arts May 12–14.

Jonathan Shipley is a freelance writer whose work has appeared in the Los Angeles Times, National Parks Magazine, and Oh Reader!, among other publications.