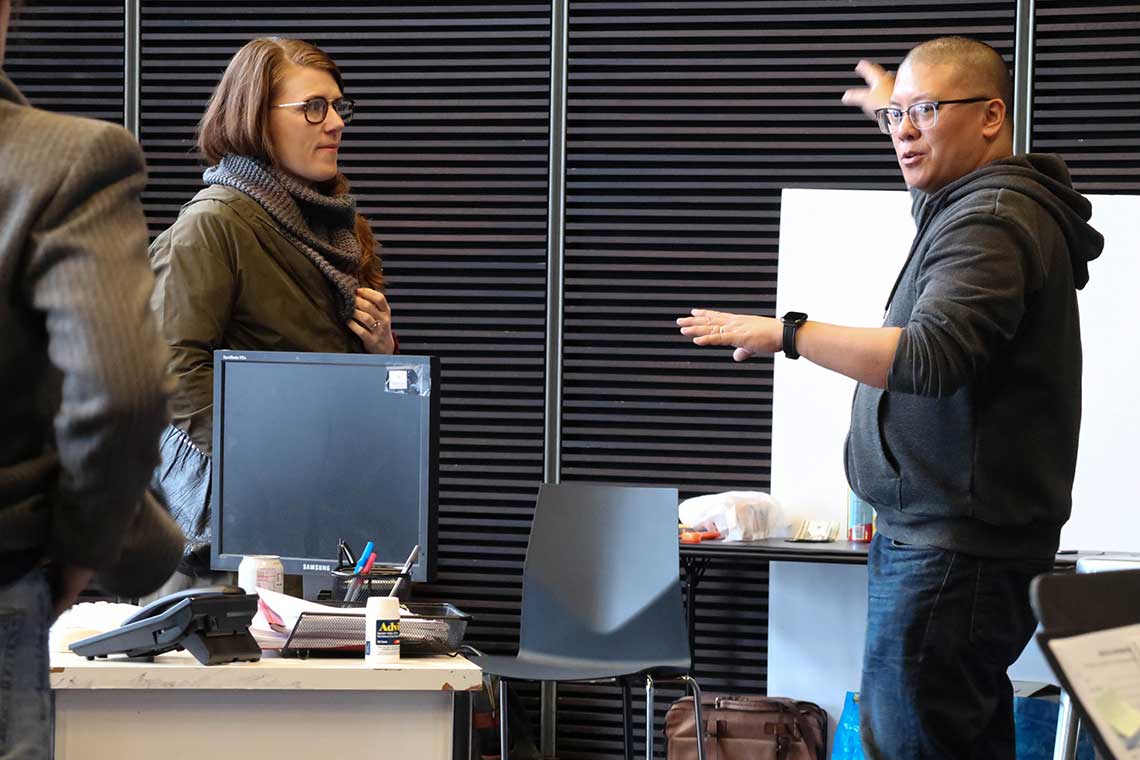 Eric Ting and cast in rehearsals for 'Gloria' at A.C.T. Photo by Beryl Baker

When director Eric Ting and I hopped on the phone during his lunch break, we immediately started comparing Branden Jacob-Jenkins trivia. I was coming into the conversation as a fan, watching his work from the audience as I moved from city to city, fortunate to find Jacob-Jenkins’s work in each new hometown. And while I’m a fan, Ting is a friend and a close collaborator.

Ting spent years developing Appropriate with Jacob-Jenkins, going on to direct that play at the Mark Taper Forum in 2015 and An Octoroon at Berkeley Repertory Theatre in 2017. Our conversation was in the middle of the Gloria rehearsal process, a time of great discovery for Ting and the cast.

Danielle Mohlman: What excites you about working on Gloria now? What makes it right for these 2020 Bay Area audiences?

Eric Ting: What this play offers is a kind of examination of the sort of depersonalization of our society—the conditions with which we dehumanize each other and disconnect from each other and miss each other’s pain. And [Jacob-Jenkins] contains it all in an office comedy. It’s largely—on its surface—a comedy about office culture. But he’s just an incisive observer of human behavior. And so the joy and pleasure of working on a play like this is identifying all of the very complex, contradictory subtext that unfolds in these plays. The conditions of living today are conditions that are often contradictions of itself. And I think that’s something you find in all of Branden’s characters and plays. These are people that are living with intense anguish and pain and also intense love.

Yeah, and one thing that I’m fascinated by is the fact that this is at its core satire, but dealing with very real issues. And I’m not going to spoil what those real issues are. But how are you navigating that juxtaposition between the reality of tragedy and the satirical, comedic elements?

Can I ask you what you mean when you say “satire”? We were literally having this conversation in rehearsal the other day about that word. What is your definition?

I think that my definition is probably not the right definition.

When I think of satire, I think of that biting reality that’s not necessarily laughing with you, but laughing at you. Which is probably not how Merriam-Webster would describe it.

I think I’m also using that word because it’s being used in the marketing that American Conservatory Theater (A.C.T.) is putting out.

Totally. And there’s a big difference between marketers and directors.

And maybe we should be talking about that instead.

Well, this is an interesting play because that central trauma around which the play pivots. The social commentary really kicks in in the second half of the play because it’s so unexpected. And Branden is so smart and how he wrestles with it is through the eye of someone who has a deep understanding of why it happened. And that’s partly what makes it so funny, you know, is that what’s unfolding on stage is so familiar.

We were talking the other day about this notion of the assistant editors. They’re these three people who spend all their days tearing things apart. And what does it mean to exist in a world where your primary action is surgical? Your whole thing is about the dissection of art and culture. For me, Gloria is a person who just wants to see good in the world and she keeps being confronted with these people who want to tear it apart.

On some level, one of the things that we keep reminding ourselves is this need to really come at these characters with immense compassion and generosity. We need to understand why they do what they do, and not simply leave them on stage as a symbol of a corrupt culture, or of a society in decline.

And here we are in the Bay Area—the tech capital of the world. And when we talk about the things that have the potential to contribute to the depersonalization and the dehumanization of our world, it’s not hard to look around and be confronted by those impulses, to disconnect from what you’re seeing, to disengage from it as a coping mechanism or survival instinct.

I want to talk a little about your role as artistic director at Cal Shakes if that’s okay.

This is going to sound like a silly question, but when you Google your name and Cal Shakes, the first thing that comes up is the tree that was planted to commemorate your arrival in 2015. So I’m wondering: how is the tree doing?

The tree is good and healthy. It’s grown—it gets bigger every year. You know, just before I got here, the Bay Area was in the midst of a drought. And then I arrived and all of the sudden it started raining. Cal Shakes is a beautiful space. Part of what it’s known for is the vista of rolling golden hills in the backdrop, which we use as part of the visual experience of the plays. Every so often, we work with somebody who hasn’t been back to Cal Shakes in a while and they come and they’re like “What happened? The trees got so tall. Can you cut them down?” And we’re like, “We can’t. It’s not really our property.”

And plus, you want the trees to thrive!

Right, exactly! It was a really amazing moment. We have an extraordinary volunteer corps called Will’s Weeder’s and they come out every year at the beginning of the season to prepare the ground for the public. And they take care of the gardens around the theatre. It was a gesture of welcoming to plant that tree in my honor. And it’s definitely something that I think about. I’ll sit up there on the hill and read plays, or take phone calls there from time to time.

I guess so. You’re the first person to ever ask me a question about that tree!

Revised on February 11, 2020: A previous version misnamed the organization “Will’s Weeder’s.” It was stated as “Will Leaders.”