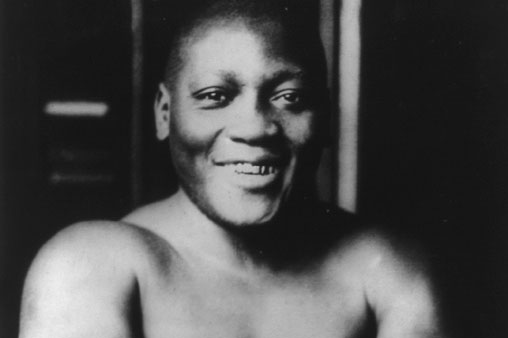 The Royale, a play by Marco Ramirez, opening this weekend at ACT Theatre, is loosely inspired by Jack Johnson, the first African American world heavyweight boxing champion. The play was nominated for a Drama Desk Award for Outstanding Play.

Jack Johnson, according to Ken Burns, who did a documentary on his life, was “the most famous and most notorious African American on earth.” With a boxing record of 104 fights, he won 73 of them, 40 by knock out. Outside the ring, he was thought scandalous for flouting the day’s conventions for what it meant to be black. One of his three wives was white. He flaunted his wealth. He raced cars. He owned a night club in Harlem that would later be the Cotton Club. But, mostly, the man could box.

Here he is fighting James Jeffries, a world heavyweight champion in his own right:

Here he is grappling with Jess Willard, known as the Pottawatomie Giant: