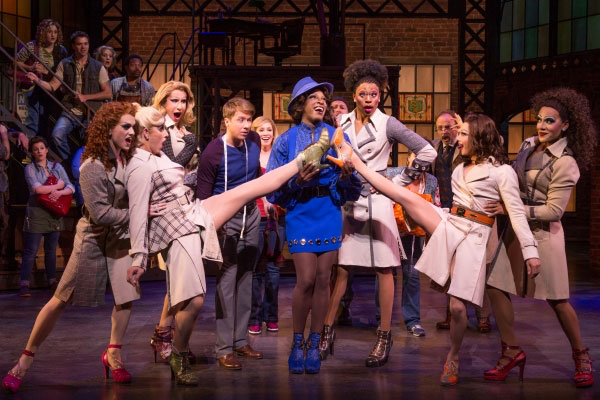 This month the 5thh Avenue Theatre mounts the touring Broadway production of Kinky Boots, the Tony-winning musical with songs by Cyndi Lauper and book by Harvey Fierstein. In the show, the owner of a beleaguered shoe factory enlists the help of a drag queen to save his business by producing a line of fabulous (and sturdy) footwear for larger-footed divas.

Recent local contestants of RuPaul’s Drag Race have put Seattle on the map; Jinkx Monsoon won season five and BenDeLaCreme won Miss Congeniality last season. I’d imagine we’ve got as discerning an audience as you’ll find for cross-dressing spectacles, so in the interest of providing Encore readers with the most cultivated possible perspective on the show, we sent a pair of drag queens en femme to opening night.

Cassie O’Hara and Anita Goodmann have been blending drag, burlesque, fashion, and comedy in Seattle for years, and they collaborate on the quarterly sketch/improv show The Anita Goodmann Experience. They’re delightful. I talked to them the day after the show.

O’Hara: I was a little worried about that with the hair I was wearing, so I puffed it down a little bit.

Were people tripped out to see a pair of draq queens in the audience?

Goodmann: Several people came up and recognized me. We were waiting in line for drinks and these two girls, Ashley and Ashley, were like, “Ooh, Anita Goodmann, we know you! We love Ben de la Crème and Jinkx Monsoon.” [Cattily] Ok, great.

O’Hara: I saw my old boss. She didn’t know who I was and I didn’t tell her. I was standing about two feet from her. Her husband bumped into me and they had no clue. I was debating whether or not to tell her who I was and get a reaction, but it could spread like wildfire around the office.

Goodmann: These things we’re talking about really tied into the themes of the show. Something meta was going on.

As far as the play, do you feel like drag was presented in a positive, real light?

O’Hara: I think so. The whole theme of it was self acceptance and accepting people for who they are. There was this factory worker, Don, a big typical macho alpha-male type. When Lola came in there was some resistance from Don because it was threatening his masculinity, seeing this drag queen in the factory. They had to do a little work to learn how to accept each other. Both people were not who they necessarily seemed to be from the outside. Everyone wears a mask.

Goodmann: There’s also a really strong theme of parenting in the movie, with Charlie and Lola. Neither of the characters was the child they thought their dad wanted them to be.

O’Hara: There’s a powerful scene with Lola performing at an old folks home. There’s a guy in the corner slumped over, and as she does her thing he can’t really lift his head up. She goes over and puts her arm around him, and you see that it’s her father. As she walks away he kind of lifts his head a little. You have this sense they she had closure.

There’s also a number, “Not My Father’s Son,” a duet with Lola and Charlie that played into the the struggles they had living up to what their fathers expected of them. The singing was amazing.

Goodmann: The play’s obviously oriented toward a broader audience, so they work their way through a lot.

O’Hara: I thought they did a really good job of walking the line. They had it geared so the general population will like it and not be offended. People who are familiar with drag shows will appreciate the production values. All the backup dancers were incredible! This one was doing backwards somersaults in six-inch heels. The finale, I bet they spent half their budget just on this one number. It was insane. The lighting and the tech were just amazing. It’s as good as anything I’ve ever seen.

The central conceit of the show is something I’m sure both of you have dealt with: finding sexy drag queen shoes in men’s sizes.

O’Hara: Well, I’m lucky because I wear a size 8 and I only weigh 125 pounds, so I’ve never had the problem that Anita has—she wears a size 13—

O’Hara: In our show I say Anita wears size “gunboat-and-a-half.”

Goodmann: It’s true. I’m lucky that I’m just on the inside edge of shoe sizes that are still made for women. I wear a women’s size 12, so I can order shoes online. But I weigh 190 pounds and I’ve broken heels off, clear off the block.

When you’re tall and heavy, the physics of wearing high heeled shows—men don’t really understand. I’ve had people who wanted to be in our show say, “Oh yeah, I’ll do a drag part in the show,” and I’m like, “Have you worn heels ever?”

O’Hara: The first time it’s a little tough, but after 20 years it’s like anything; if you do it all the time you get good at it. After a certain point it becomes second nature. The shoes I wore last night were a 4-inch heel, simple pump. I can wear those all night and my feet don’t hurt.

Goodmann: I’m wearing flip flops today around the house, having worn boots. I needed a pedicure so my nails were a little long. They were crammed into the toe of the boot, so now I’m like, “Uhhh.”

Is that a “drag queen hangover?”
Goodmann: Sometimes you really do have a hangover in the morning, because you block out all the pain while you’re in the moment but in the morning your body’s like, “You rocked me, dude.”

We took Uber from my house. On the way home I was talking to the driver and he referred to me as “sir.”

O’Hara: He seemed like, “What did I just pick up?”

So you did get to experience a frisson of awkwardness.
O’Hara: If that’s the only intolerance I have to put up with, a guy doing his job and not wanting to engage, that’s fine.

Goodmann: I’ve been in a cab where the guy didn’t let me out, he drove around the block and said, “I’m gonna stop running the meter but I wanna talk to you just a little more, lady.” And, “You should really give me your phone number, lady.”

Are they making a pass on someone they think is a woman?

O’Hara: No, they just wanna be freaky.

Goodmann: They’re not fooled. They know what’s going on, but they also haven’t thought it all the way through, like the guy who wanted my phone number. I had this vision of him showing up at my door unannounced with a handful of flowers looking for Anita. “Uh yeah, Anita’s not home right now.”