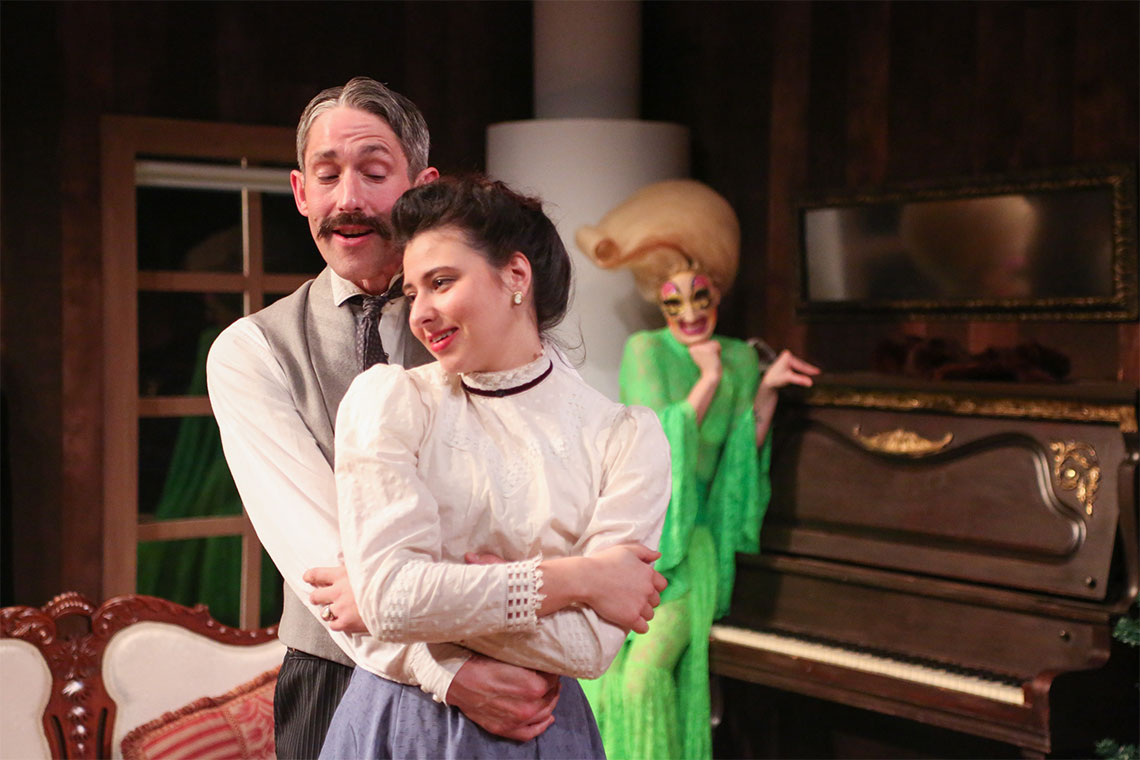 A woman cannot be herself in modern society,” Henrik Ibsen once said. A Doll’s House, a play he wrote in 1878, explored that thought, arousing great controversy. The protagonist, Nora, wants to discover herself and so—spoiler alert—she leaves her husband and children to do so, very much against the social norms of the day. It was scandalous when the play made it to the stage.

Today, entering stage right, is Cherdonna Shinatra eager to play in Ibsen’s house to see what to make of it. Can a drag queen have much to say about a fusty old play written a century and a half ago? Is it a controversy to take a classic and rework it for our modern sensibilities? How far can you revise a classic and still have it maintain it’s power? Or is it powerful because it can be reworked time and again?

One of the actor’s in Cherdonna’s Doll’s House, now being staged by the Washington Ensemble Theatre at 12th Avenue Arts, is a pre-teen boy. He gets to say “fuck” on stage, much to his delight. Controversial? Shocking for an Ibsen play? In this day and age? And, particularly in Seattle, haven for boundary pushers, creative seekers, imagination fiends, and people who pride themselves on being themselves? Is there a better place to showcase these questions than on stage with a drag queen eager to say something more about a play long since written? The show, being touted as a “sort of world premiere” tries to answers these questions.

Adapted by Ali Mohamed el-Gasseir and Cherdonna (Jody Kuehner), the original work was one Ibsen based on real-life events. Nora was based on his good friend, Laura Kieler. Much of what happens on stage between Nora and her husband, Torvald, happened to Laura and her husband, Victor. Victor found out about Laura’s secret financial dealings and so divorced her and had her committed to an asylum (she would later come back to him).

What would Ibsen make of this new production? One in which the script has been truncated, chopped up, rewritten and redone? The show is directed by Ali Mohamed el-Gasseir. Having loved the Ibsen piece for years he began talking about it with Kuehner. Could they take a feminist classic and showcase it through a modern feminist lens? What would that do? Make people laugh, for one.

Reviews are in. It’s “laugh-out-loud.” A drag queen in A Doll’s House is funny stuff. But what else could it do? Entertain people. Maybe even make them think. “What’s the purpose of the classics?” asks Samie Spring Detzer, the Artistic Director at Washington Ensemble Theatre, who also has a role in the play as Mrs. Linde. “We have to test them. We have to see if they’re still valid.”

Test, this show does. Actors play the roles in Ibsen’s work but when Cherdonna starts playing in the doll house, as it were, the actors also being playing themselves as they play the characters. Samie Spring Detzer admits of the Ibsen’s original play, “It doesn’t mean a lot to me today.” Feminist play or not, she continues, “if you don’t recognize yourself in the work, it loses its power.”

The creative team, then, decided to try and give it a different kind of power—take a modern day feminist and get their take on what feminism was (though that was yet a term in Ibsen’s day). “It is a collaborative process,” Detzer notes. The director and Cherdonna worked arduously reworking the text to meet the demands of the questions they hoped to answer. They also wanted to make the audience laugh. Dance sequences and cookie breaks help. “It’s the collaborative process,” Detzer notes, “that’s valued beyond most anything else.”

A Doll’s House has taken quite a journey, then, from those initial performances in the late 19th century that scandalized the world to today, where a drag queen boundlessly delights about how marvelous Nora is and, by doing so, how marvelous classics may still be.