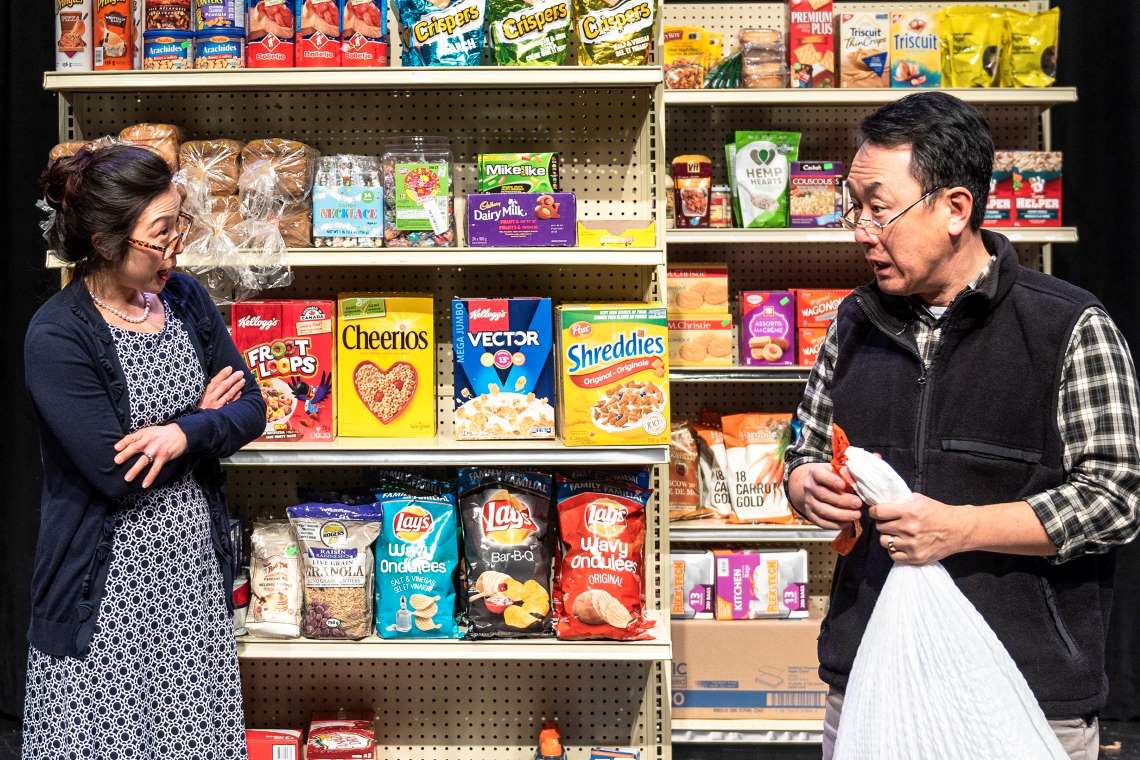 One of Seattle’s most prolific directors and actors, David Hsieh is well known for bring diverse work to the stage as the founding artistic director of ReAct. His many credits also include performances in Book-It’s productions of The Brothers K and Hotel on the Corner of Bitter and Sweet, as well as in The Happy Ones and The Best Christmas Pageant Ever at Seattle Public. Co-directing Kim’s Convenience with Taproot Theatre’s founding artistic director Scott Nolte, Hsieh is realizing a long-held ambition in bringing Ins Choi’s warm-hearted comedy about a Korean family and their friends to local audiences.

Rosemary Jones: Kimbits, as fans of the series Kim’s Convenience are known, largely come from watching the Canadian television sitcom starting in 2016 or streaming on Netflix since 2018. Did you first encounter Ins Choi’s Kim’s Convenience as the stage play or online?

David Hsieh: When the published version of the script was first printed in 2012, a copy of it landed on my desk. (I was the drama book buyer at a local bookstore at the time.) I knew nothing about it but being a play with Asian themes. I added it to my huge ever-shifting pile of plays to read. I didn’t actually get to it until a few years later after hearing Ins Choi being interviewed on the radio one night. He was talking about the play and its great success at the Toronto Fringe and subsequent Soulpepper tour as well as the new series in the works. I dug my copy out the pile and read it, and immediately fell in love with the script. I don’t have Netflix or anything but when Scott first asked me to help with the production, I binge-watched [the series] on YouTube and am now a huge fan of that as well.

Who is your favorite character in the Kim family?

I’m not one who likes to pick favorites. I actually like them all…and that’s what I find intriguing about the play and how it’s written. I think everyone can relate to each of the four family members in different ways, as well as the variety of other characters that visit the store. Growing up second generation in an immigrant Asian family, I can definitely relate to both [the Kim’s adult children] Jung and Janet’s characters and what they are going through in the play. But the parents of course are also so wonderfully written, in particular the part of [the father] Appa, who is such a fun role and an amusing take for the audience. On a personal level, I don’t have a strong relationship with my own father, so the storyline between Appa and Jung is particularly affecting for me.

What are the differences you see between the Canadian series and the original play?

Well the TV series was inspired by the play, but there are differences. While the family and basic plot is similar, and there are some scenes and sections of dialogue from the play peppered into various episodes of the series, particularly the first season, there are many differences. For instance, in the play, Jung left 16 years ago and in the series it’s only been about nine years, so the characters are all younger and at a different point in their lives. As each season has unfolded the series has expanded and grown and diverged more and more. There are some things in the play that are quite different, and probably can’t happen in the timeline of the series any more, almost becoming an alternate reality. I think TV audiences will be intrigued to see the play and these differences and what inspired the TV show.

When did you hear about the Taproot Theatre production?

Scott Nolte notified me over a year ago that they were hoping to get the rights to do this American West Coast premiere and asked if I’d be interested in working on the project. I immediately and enthusiastically said yes and a few months later, the rights were confirmed.

How does co-directing work with Scott Nolte?

I think it works really well. This is my first chance to work at Taproot, a theatre that I’ve admired for decades. Scott and I have known each other for many years. We have the same sensibilities and appreciation of theatre as well as the same take on Kim’s Convenience. He obviously knows the space really well, and of course I have a unique perspective for this play and we make a good team.

As co-director, what’s your biggest challenge in preparing for opening night?

Well, as with any production I’ve helped direct, our biggest challenge is to create and present the best production of the play as we possibly can. We have an amazing cast. I think Seattle audiences are really going to enjoy this production. You know it’s going to be a good show when you’re still laughing and being moved to tears by the play deep into the rehearsal process, another testament to the brilliant script created by Ins. Our greatest joy will be to see Seattle audiences enjoying this timely and universal story of family love. It’s been so well received at every place it has been produced. I hope this show will be one of Taproot’s biggest successes.

Taproot Theatre’s production of Kim Convenience runs May 15 through June 22.

After Kim’s Convenience opens, Hsieh will be directing the West Coast premiere of Salty by AJ Clauss, a play about penguins and zookeepers, for ReAct Theatre at 12th Ave Arts.