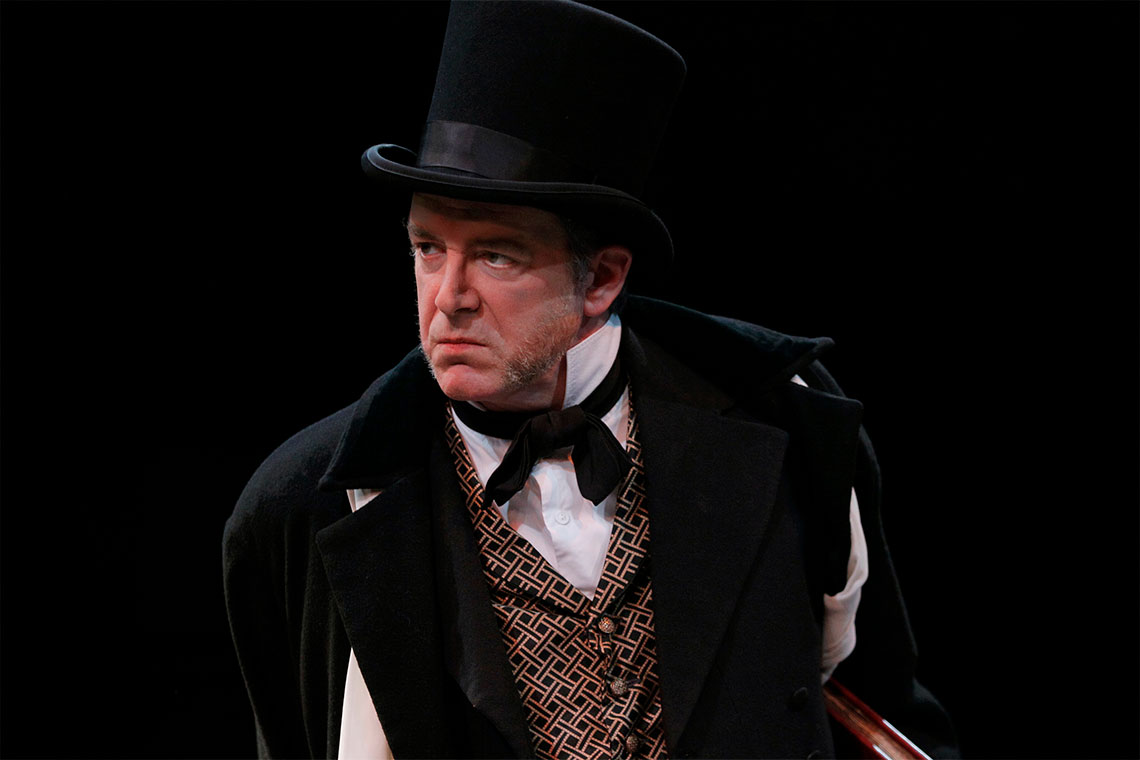 Long before I became editor of this publication I worked in retail for years, and it nearly ruined Christmas for me. The brusque impatience of put-upon holiday shoppers, the insipid carols we had to play on the shop stereo for over a month, the rapacious corporate imperative to wrest maximum profit from each sale; these all contributed to a general aggravation with the holiday season. Each December I became a sort of low-level Scrooge.

I wondered how much more difficult it must be to enjoy the holidays if you’re a theatre artist working in one of the many Christmas-themed shows this month. These actors mustering rosy-cheeked cheer for each performance, do they grow as tired of the enforced frivolity as I did working retail? Or does it perhaps enhance their experience of the holidays to see that expectant joy on the faces of their audiences night after night? Are they, as artists, able to conjure up seasonal joy like a Pentecostal preacher being filled with the Holy Spirit for every Sunday’s sermon? Or—I must address this possibility as the husband of a secular Jew who couldn’t care less about the holiday—is it just another gig?

I sought out Charles Leggett, who’s playing the lead in that granddaddy of all Christmas plays, ACT Theatre’s A Christmas Carol, running through December 30. After playing other roles in his eight-year tenure on the show, he’s assumed the mantle of that ultimate icon of holiday transformation: Ebenezer Scrooge. (He’s alternating the part with longtime Ebenezer/departing artistic director Kurt Beattie.)

I asked Leggett a few questions about the practice of spreading dramaturgical cheer each December.

You’re celebrating Christmas every day for over a month. Does that effect your perception and experience of the actual holiday?

Well, at a performance of A Christmas Carol, the audience is there to celebrate Christmas; we in the theatre are there to help them do it by telling them a great story.

Christmas functions in the play as a figure. Scrooge is a man who rejects Christmas—is, as our director John Langs is given to saying, fully “at war” with Christmas. But when the Ghosts say, “Come, let us see another Christmas,” what Scrooge is being shown is life itself. His life, and the ways in which others have lived their lives affect or have affected him, and the ways in which he has lived and continues to live his life have affected, still affect and may go on affecting the lives of others. The play celebrates—and in it I celebrate—seeing life, not turning away from it to begin with, and seeing it. To me, Christmas in the play is the vehicle for this.

It does make an impression, however, to tell this great story in a room full of all those people who are there to celebrate Christmas, boy howdy. A Christmas Carol at ACT is now in its fortieth year; people who were youngsters when they were brought to see John Gilbert originate the Gregory Falls adaptation’s Scrooge decades ago, and who subsequently brought their children to see it, now bring their grandchildren, all dolled up in their Christmas Best. There are literally people for whom the holiday season would not be complete without, say, a Narrator’s list of unflattering adjectives describing Scrooge being punctuated by Himself slamming stacks of coins down upon his desk, or without one of the charity solicitors crossing out “Scrooge and Marley” in his record book in perfect time to the music after being thrown out of the Counting House by Scrooge. And we’re noticing currently, having just concluded our third week of performance, the crowds getting warmer and warmer as more and more of the Advent calendar’s windows get pried excitedly open.

This is your eighth production of A Christmas Carol. What challenges does that present to you as an actor, revisiting a show over the span of years?

Most challenging were probably some of the latter iterations of the Ghost of Christmas Present. My first five of those were in consecutive years (2002–06), so by the fourth or fifth year of that run, perhaps the challenge stiffened. The challenge lies in what the show demands in order to be effective: total commitment. The hearty joys and the stinging sorrows and the ebullient parties and the raucous street scenes must be convincing and get all the way out into the audience, or else Scrooge’s workload in the piece would unreasonably expand. All that and, until recently, twice a day, six times per week! (This year ACT has scaled it down, topping out at ten shows per.) It’s hard work. It costs, and it should; it’s tiring, and it should be; it is a trenchant and delicious challenge, and one that is deeply rewarding with which to be repeatedly entrusted.

This year, my first as Scrooge, is a whole other matter, and I am even more grateful for those seven previous turns—the learning curve for playing the role has been much less steep. Also, now I can really live inside the parts of this piece that I’ve missed while playing those previous roles, the parts of the play (particularly in the Christmas Past segment) that moved me most in the rehearsal hall years past.

You’ve played another towering scoundrel visited by ghosts: Roy Cohn in Intiman’s 2014 production of Angels in America. Who’d be a worse boss: Cohn or a pre-revelatory Scrooge?

Scrooge. Sure, Roy Cohn was a nut job, worked his lawyers very hard and made them do ridiculous things—many of them to cover for his own lack of preparation and/or distaste for actually being in a courtroom. But it must at least some of the time have been quite an adventure—think of the people that came through that office!—and I don’t recall reading (don’t quote me on this, I may be dead wrong) that among all of the things Roy managed to get out of paying for (which were legion), his own staff were among them. And, if you came out the other end still on good terms with the man, he could certainly do you some favors—such were his stock in trade! If you survived it, and played the game the way he did, working for him might well have become quite a boon.

Scrooge, on the other hand? Cold, pure and simple; Dickens devotes much description to his coldness. Roy would at least want you to do well, even if he set impossible tasks; Scrooge seems to care only that nothing you do causes you to cost him more money than you should, which entails punctuality, the utmost efficiency, the complete absence of mistakes, and no regard for physical comfort whatever. Forget fun: fun is anathema to Scrooge, not least because its worth (not that it has any in his eyes) cannot be calculated.

That said, there are people for whom a consistent workplace setting is more important than an adventuresome one; people who value—even rely upon—knowing exactly what is expected from them in an environment that suffers no change. So long as such people performed well, could afford warm clothes in winter and didn’t mind a cold and stingy boss.