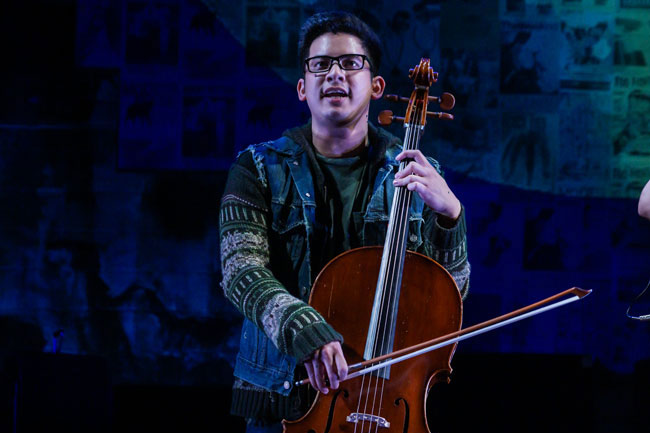 Last month’s Lizard Boy at the Seattle Rep was a musical romance, a live-action superhero comic book and a semi-autobiographical gay-coming-of-age allegory. It was also the Rep’s first world premiere musical in at least a generation. Late artistic director Jerry Manning commissioned young theatre talent Justin Huertas to create this hybrid new work, and the result was a critical success. Manning passed away just over a year ago and Lizard Boy stands as a testament to his artistic vision. The play itself is pure Huertas: tuneful, earnest and current.

We rarely circle back after a show closes to touch base with its creator and see how the work impacted them. Thus I took some time to talk to Huertas about the play, Manning’s legacy, and what comes next.

You’re a few weeks out from closing Lizard Boy. What are your thoughts on how it came off?

I’m really proud of it. It was successful in ways that I never dreamed. I knew it was gonna be fun, because I wrote this show where I get to play music with my best friends every single night. I was excited when I found out that we got extended for a week.

Just the reception we’ve been getting from all kinds of people—I mean, I figured people in my age group would be excited by the ’90s references I put in there. Some people had been telling me, “The older subscribers are not quite your audience so they might not receive it as well,” but they really have. People have stopped me on the street to tell me they loved the show and the music and that they found ways to connect to it. That’s been the most surprising thing to me—how many ways people have found to relate to it.

We’ve just observed the anniversary of Jerry Manning’s passing. It must have been extraordinarily intense to have someone shepherd you into this work and then see it come to a close.

He’s been on all of our minds working on this the entire way. In the rehearsal room we’d say we feel Jerry in the room. It would come in certain character moments, certain song moments that we knew he loved and some of the jokes he inspired in the show. When we moved to the stage we posted a photo of him in the back of the house.

This whole experience has been so vastly overwhelming that I didn’t often get a chance to sit and think, Wow, this is a thing that Jerry saw in me four years ago that I had never ever seen in myself. So when we celebrated him on the anniversary of his death, which was the last Thursday of the show, it felt like a huge moment. We had a lot of people from the Rep—our friends and Jerry’s friends—in the audience that night.

We did the show and felt the energy and then after the show we sang one of his favorite songs, a ballad called “Old Man.” That was an amazing moment. We gave ourselves, onstage, a moment to say, “This happened because of him.”

Are there any further plans for the show?

Not quite yet. There are a lot of ideas up in the air. I’ve been approached about a graphic novel based on the show and a possible film adaptation. It’s all kind of a big question mark and we’re trying to decide which direction to step in.

The Rep and Brandon Ivie, the director, are really excited about taking this show somewhere else. We’re not sure where yet but we wanna keep doing it.

Where are you on to now?

I’m gonna be in Grease. And as a playwright, this was my first professional venture and I want to keep doing it. So I’m talking to a couple different theatres that I’ve worked for before. I have a billion ideas whirling around in my head. Now that I have this newfound confidence: “Oh, I guess I can write something!” I want to continue and hone those skills.

I am a dragon man! [Laughs]