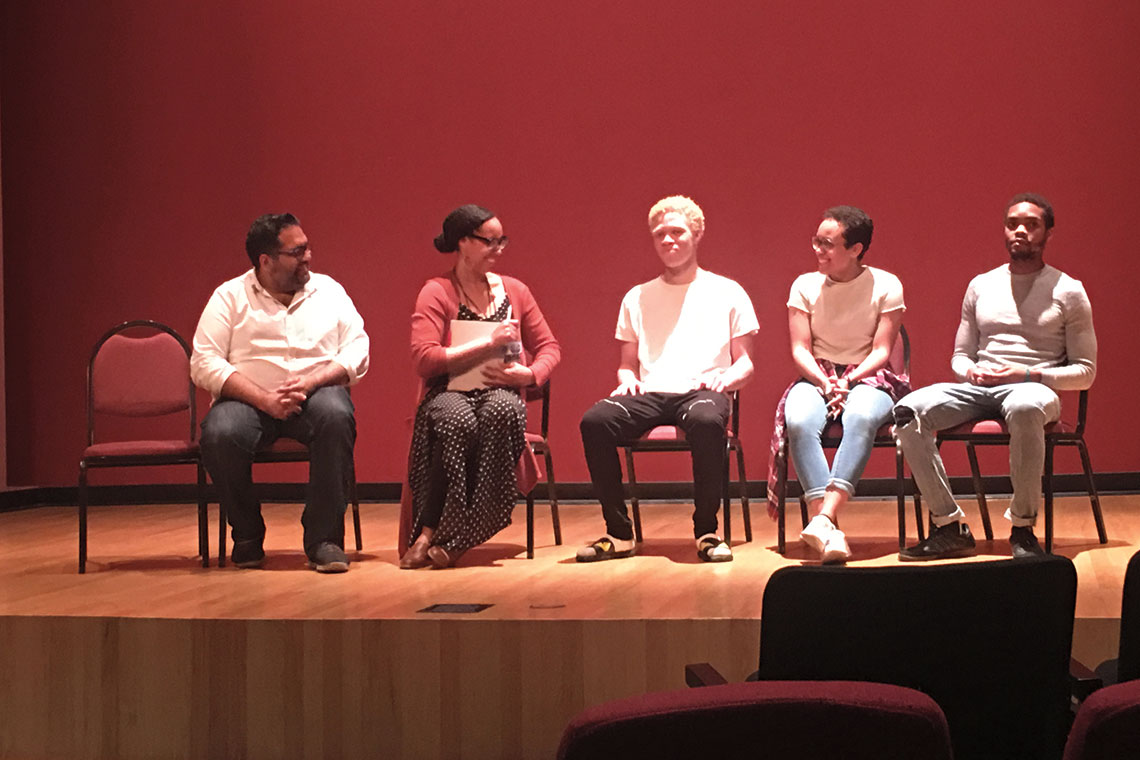 Playwright Julie Taiwo Oni explores the difficult, yet necessary task of casting actors who authentically represent characters written and the effect this representation has on marginalized identities.

How do you cast authentically when there is not a single actor of a certain identity to be found within your community? If my mission as a playwright is to share stories of the underrepresented, then how can I cast an actor who lacks the marginalized identity my script requires? This obstacle is an important element of the current fight for fairness in casting, and I encountered it full-force on my own journey to find a Black teenage male actor with albinism.

As a Nigerian-American and a storyteller, I am in constant conflict between heightened awareness of widespread misconceptions of non-Western cultures (my global side) and sheer shock and horror at the encountering of some ritual practices (the good ole American in me). When I first heard about the persecution of PWAs (person with albinism) in Africa from my father a few years back, I thought it must be an ancient myth; I was mistaken. In fact, even today, Tanzania has one of the highest global rates of people with albinism, and they are frequently attacked and killed for the sale of their bodies to witch doctors for good luck potions.

To dramatize this unfortunate story, I wrote Chisel, a two-character play about a Black American teen with albinism and his interaction with a biracial Tanzanian art student. Sal, my teen protagonist, is in conflict with his albinism because he doesn’t feel that he’s accepted as a Black Lives Matter activist due to his lacking pigmentation. He therefore engages in an aggressive activity that lands him in a juvenile detention center. Alice—his counter—struggles with being mixed race in a culture that often resents non-native citizens. I finished a draft of the play and placed it aside a few years ago, mainly because I had no idea who would perform either role, especially that of Sal.

The representation struggle has become all too familiar these days, from the rampant cultural appropriation of hip-hop, to Katy Perry’s kimonos and dreadlocks, to the whitewashing and gender identity-crossing of Hollywood via the likes of Scarlett Johansson. Yet an important part of the conversation is the challenge of representing marginalized identities when privileged bodies are so much more accessible on casting couches. Constant rejection and appropriation discourages under-represented actors, making it even more difficult to get them into the room. The unfortunate result is that more privileged actors get more opportunities to hone their skills in all levels of theatre.

Sometime into my own representation journey, my friend Bri, who was set to perform the role of Chisel’s Alice for a reading, sat down to help me brainstorm possible actors to play the PWA male character Sal. We were at a loss. Would an audience be able to gather the full weight of the story—centered on the identity of a young man with albinism—if the actor playing the role did not have this condition? It felt so important to see him. We decided that the absolute minimum at that moment was to find somebody who would understand Sal’s journey intellectually and be willing to engage in conversation about the PWA plight. We decided to cast Tom, a TV actor and friend. The reading went well, but the question of course came up: was this play castable?

Is it worth the ongoing and discouraging search for an actor of a marginalized identity when there are so many of privilege willing to play the role?

I believe it is.

So, I persisted. Everywhere I went, to anyone I met, I mentioned Chisel and my struggle to find an actor. I spoke of the PWA attacks in my classes on culture. I emailed modeling and casting agencies. I asked my acting students for recommendations. The result was a sharing and tagging anytime a friend or colleague saw a story on albinism and a collection of books and magazine articles sent by friends, yet still no Sal.

Perhaps six months after the reading, I got a message from Tom: “I see the Tanzanian albino girls we talked about in rehearsals.” The girls were Tindi and Bibiana Mashamba, sisters who were in Los Angeles on refuge after Bibiana had been attacked and lost a leg and fingers. They were at his local lunch spot. My heart jumped with joy. “Well talk to them!” I waited impatiently. Hours later, he told me he’d lacked the nerve to speak to them: “I didn’t know what to say. Sorry.”

And here we encountered the next obstacle on our mission: the hypocrisy of drawing attention to albinism when the heart of Chisel’s story is about a desire for acceptance instead of social isolation. If I were to pass a Black male with albinism that looked like a possible Sal, what would I say to him, “You’re a PWA, I need you”? Fortunately, Tom saw them again a few months later and asked if they would be interested in meeting up with the Chisel team. They were overjoyed (probably because they recognized him from TV, but I’ll take it). Their host and co-founder of African Millennium Foundation, Malena Ruth, arranged for us to all have tea. During our meeting, they told the story of Bibiana’s attack, and we were all horrified by their trauma yet inspired by these two warriors.

If only these girls had been actors.

Despite these frequent roadblocks, I firmly believe that the theatre community can work together to hold each other up in the mission toward authentic casting. I think most of us want representation; the challenge is the grit that it requires.

A year or two after the initial Chisel reading, with a second reading under our belt but still no PWA actor for Sal, a new theatre colleague sent me contact information for a Black actress with albinism she’d heard about in Chicago. I emailed her a long, detailed, impassioned letter about my journey and how excited I was to be connected with her. I didn’t expect a reply. Ten minutes later, I got one. She was as excited as I was to be in touch.

I sent her Chisel and thought that perhaps I could find a way to cast her in the male role or adjust the script’s gender dynamics. She gave me the most heart-felt and thorough script feedback I had received, noting the ringing-true to her experience and sharing questions that came up. Casting her proved an impossibility because of the story’s essential commentary on Black male experience, but I promised to keep in touch and update her on the process. We made plans to collaborate in the future, and I asked if she knew any male PWA actors.

This is it, I said to myself, crafting another heartfelt email, this time, at long last, to a Black male actor with albinism. I got no reply. I was back to square one, even with some strong and inspiring ladies in my court.

A few weeks later, I was scrolling through my Instagram when I saw a post from @albinism_beautiful, a group I’d been following for years. It hit me that the members of this particular community might be worth approaching. The second I passed the profile of Jordan White, an eighteen-year-old young man from Atlanta, I knew I’d found my Sal. He was a Black teenage male with albinism with the description “Actor/Model.” I didn’t wait this time. I messaged him immediately and heard back within an hour or so. We began an ongoing dialogue about my play.

It turned out one of Jordan’s most prominent performances was tied to another PWA actor’s casting in a TV series shot in his city. Marginalized groups do have this profound ability to hold each other up, but we need to see that others respect our stories as well by pushing forth characters that are multidimensional—not archetypal. And we need the space to bring them to life ourselves. This is the key to representation.

On June 14, 2018, Jordan flew to LA for the first time to perform in a reading of Chisel at Pepperdine University, where I work. The Department of Humanities and Teacher Education generously hosted him for Albinism Awareness Day. After months of talking through the script and planning, we finally met in person.

I was shocked by this young man. He reminded me of the importance of life experience and observation to breathe humanity into a story. Jordan was an articulate, enthusiastic, hilarious and confident guy. When he entered the theatre, fresh off a long flight (and the first of his life), he greeted us all with handshakes and hugs, pumped and ready. I had anticipated—after all these years of studying the oppression of PWA—to encounter a shy and self-conscious young man who would need time to warm up to us; he was just the opposite.

“I like to be seen,” he said as we drove down Pacific Coast Highway after that first rehearsal. “I used to be mad all the time and hate the stares, but now I just smile.”

In a world of rampant cultural and identity appropriation, we have a responsibility as practitioners of live performance to allow the audience to experience another’s story truthfully. The joy of encountering an underrepresented actor onstage playing a character of his or her actual identity is too powerful to forego. The more marginalized actors see themselves represented authentically, the more they will start to fill our casting couches. The maze will dwindle.

Julie Taiwo Oni is a Nigerian-American playwright with an interest in exploring the African diaspora through narrative. Recent plays include nat&EM, Bunk, Denim, Black-Proof, and Chisel—a story that displays the oppression of people with albinism in Tanzania. Oni is Visiting Assistant Professor of English at Pepperdine University. julietaiwooni.com

This piece, Casting an Actor with Albinism: The Importance of Authenticity on Stage by Julie Taiwo Oni was originally published on HowlRound on August 2, 2018.