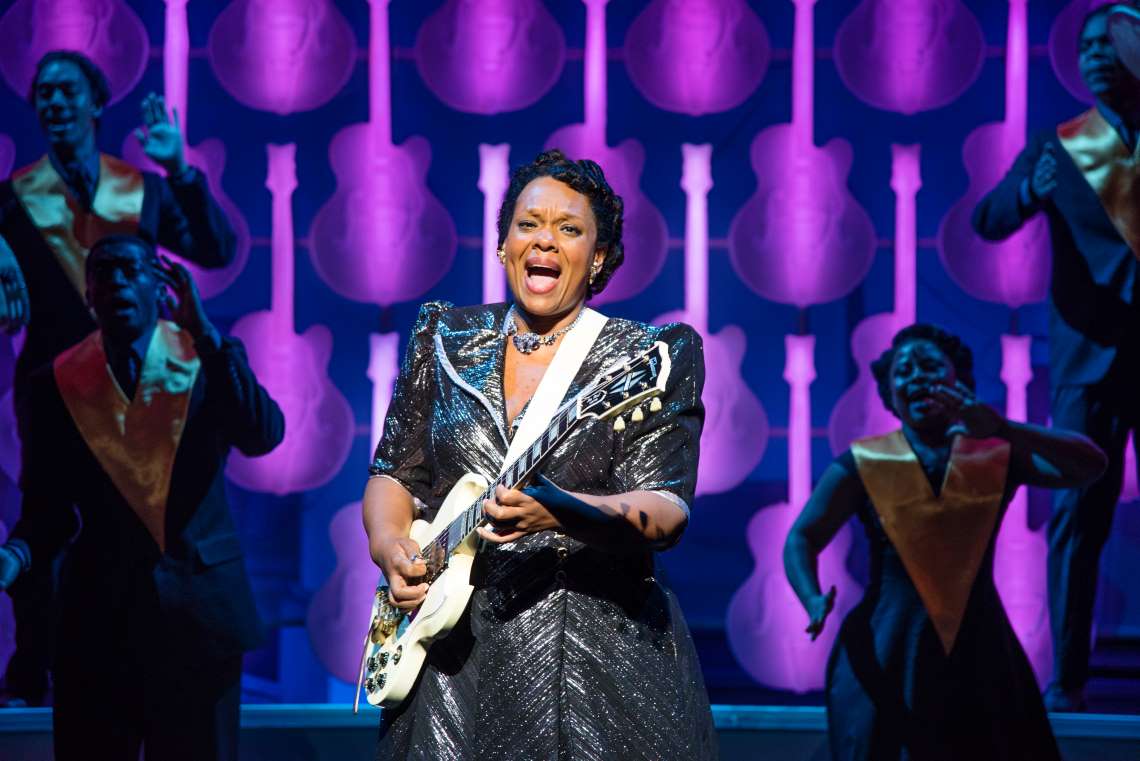 When I spoke with actress Carrie Compere mere days before Shout Sister Shout! rehearsals were scheduled to begin at Seattle Rep, her excitement surrounding Sister Rosetta Tharpe and this play was palpable.

“I think the thing that I’m most excited about, is for people to hear about who she was,” Compere said, adding that Tharpe’s contribution to rock and roll wasn’t just musical, it was cultural as well. “That this beautiful black woman from the middle of nowhere influenced so much of what we hear today—I’m just glad her name is going to start to ring out there, you know?”

And as we continued to discuss The Godmother of Rock ‘N’ Roll, that excitement only grew.

Danielle Mohlman: I’ll admit that I didn’t learn about Sister Rosetta Tharpe until probably two years ago when the book that Shout Sister Shout! is based on started making the rounds again. I was like “Who’s this? I need to know more!”

Carrie Compere: Yeah and it’s so cool because the first time I ever heard about Rosetta Tharpe—the very first time I ever heard her name mentioned—I happened to be on my first tour that I was in. And we were in Memphis and went to go visit Graceland. And there was a man there with a small group of people—I don’t know if they were his family or if he was giving a tour or what. And he sounded like he was from Great Britain. He was the one who mentioned her! And he was talking about how Elvis had been influenced by Sister Rosetta. And the way he talked about her, he was so excited, and I was just like, “Oh this woman must have been something else.” You know? Because that was the very first time I’d ever heard about her. And to now know who she really was and what she did for music is really amazing.

Yeah. And one thing I find really fascinating, the more I learn about her and the more she comes up in these pop culture conversations, is the fact that her queerness was left out of the conversation for a very long time.

And the play has tones of that, but it’s not overt. And I think that—now, I don’t know—but I think that’s just out of respect for how Rosetta handled it in her own life. She never really talked about it in a public forum. Behind closed doors, when she was in areas where she felt comfortable, that was something she felt free to display. But in the script, they do touch on her relationship with Marie Knight and how they loved each other beyond the sisterly way. But they build it in a way that’s respectful to Rosetta.

And it’s wonderful to hear you portray it that way—in respect to her and the way she lived her life. Because it was a completely different time and it wasn’t safe to be public about sexuality—not in that way.

Absolutely. And she was a woman who came from not only American culture where it was such a taboo [in the 1930s and 1940s] but also in the church culture.

Do you have a favorite Sister Rosetta Tharpe song? Maybe one you’re excited to dig into in rehearsal?

I don’t know if I have a favorite. I love “Up Above My Head” and the words are so simple. “Up above my head, I hear music in the air.” I think the reason why I love it so much is because I’ve watched her perform it over and over and over again. I’ve been watching videos of her and—I’m going to get emotional right now—but once she’s singing it, you know that she’s talking about something more than just these lyrics. She’s just so rooted and grounded in gospel music—and in the message that she wanted to bring to the world. She’s a woman of faith. And I am as well. And it resonates so deeply with me, you know? And it’s an upbeat song. (Sings) “Up above my head / I hear music in the air / And I really do believe / There’s a Heaven somewhere.”

And you know she believes that. And she’s singing it and she’s playing her guitar and she’s sweating—and she’s giving everything. You know, in the book Shout, Sister, Shout!—and I’m paraphrasing this—one of her friends said there’s a difference between just singing the song and having a relationship with the words you’re singing about. And that’s who Rosetta was. It went so far beyond just the music.

Do you have a favorite moment from the play that you’re really looking forward to digging into in the rehearsal room?

Oh man. Right now I’m learning the electric guitar and acoustic guitar. Because that’s how she established herself in rock and roll, with her picking. I am excited and terrified to really dig into the actual play. And I feel completely supported by our creative team and our music department. But before this experience, I had never played guitar before in my life. So, for me, this was something that on the onset looked insurmountable. So, it’s just been me spending time with the guitar. Sometimes I will literally just strap the guitar on my shoulder and just walk around the house—just really trying to develop a relationship with this instrument.

Because for Rosetta it wasn’t just her instrument. It was an extension of who she was. And sometimes when she wasn’t being confident—when she wasn’t speaking—you could see the way she was holding the guitar, as if she was speaking through the guitar. She was using the guitar to express what she was trying to say, or to support what she was saying. And Rosetta! Oh my god, her speed? Her tempo? It’s otherworldly. It’s amazing what this woman did.