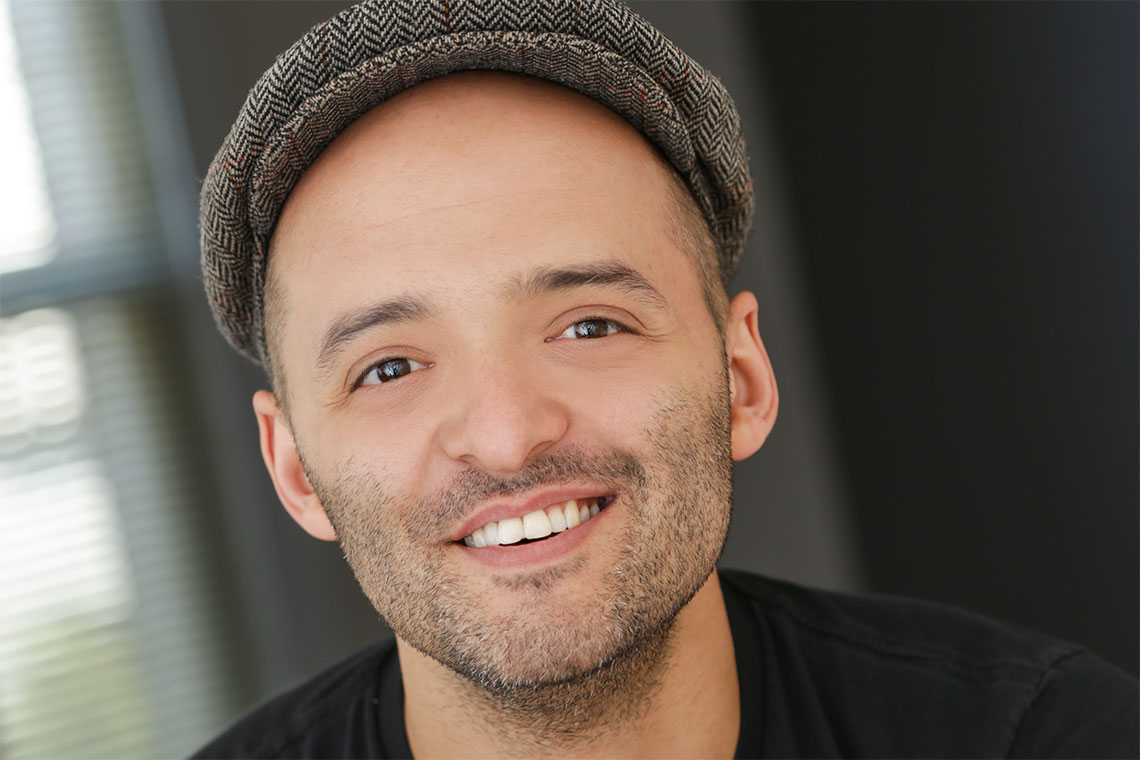 This Friday Annex opens Is She Dead Yet?, a new play with one of the most intriguing premises in Seattle theatre this summer: What happens in a world in which the last black person has died, leaving only white people? It comes at a potent cultural moment for a nation aflame with issues of race, from Confederate flag rallies to Black Lives Matter protests to the almost-daily drumbeat of black people killed in police custody. Poignantly, Annex addressed the unfortunate juxtaposition of the show’s title and marketing images with the recent death of Sandra Bland, which they broached with eloquence and compassion on their Facebook page.

It’s written and directed by Brandon J. Simmons, an actor, playwright, producer and co-founder of the critically celebrated The Seagull Project. He also happens to be a queer man of mixed race who’s able to “pass” for white in life and onstage. These facts of his identity make him uncannily well-suited to the subject matter of this new work as well as the broader national discussion currently underway. He speaks on the topic with a candor borne of both lived experience and dramaturgical erudition. I talked to Simmons about the play.

I’m fascinated with the premise of Is She Dead Yet?. Tell me about it.

I love Euripides’s Alcestis, which is essentially a story about a woman who sacrifices her life for her husband. I’m always left with the question, “Why would she do that?” There are lots of reasons why a woman in ancient Greece would, but for a contemporary audience, why the hell did she make that sacrifice? As I read the play over and over again, what I’ve come I come to realize is that it’s a play about a man who doesn’t understand his privilege, this man she died for. In the most basic sense, he just doesn’t understand his position. He’s a king. He doesn’t understand that it’s not okay to have your wife die for you.

I really wanted to adapt the play, so I started with that idea of a woman who sacrifices her life for her husband, who just doesn’t get it. Euripides explores those extremes in his play, and I wanted to do that as well, so I just kept chasing out those extremes. Then I thought, “What if she’s a black woman who sacrifices her life for her white husband? That would be a really interesting dramatic situation.” Continuing on that journey to extremes, I wanted to see what it’d be like if she was the last black person on earth, living in a white world, who gave up her life for her husband. As I explored that on the page it turned into a comedy about the insanity of whiteness in the ultimate all-white community: an all-white planet.

This was written with the backdrop of the Black Lives Matter movement going on across the country. Did that inform it?

So of course it’s timely in light of current events, and as a mixed race artist—an artist of color who’s also queer—this has been a big year. That has informed me and my sensibilities, but this isn’t a play about current events in that sense.

There’s not a lot of work happening in theatre that explores the nature of whiteness. We’ve got plenty of great white playwrights, so of course whiteness is almost the default. We go to see Tennessee Williams or Arthur Miller or most Shakespeare, and it’s not an exploration of whiteness; it’s a presentation of whiteness, a parade of whiteness. I wanted to write a play that actually tries to capture some of the contradictions, some of the absurdity.

And you’re uniquely positioned to do this.

Yes, I am because I am a mixed race artist who has passed for white for most of my life. I’ve constructed for myself a very white life in a very white city and most of my close friends are white people. I went to the white college and I speak the way I speak. As I’ve been writing this play, I’ve come to understand the extent to which I’ve been observing whiteness almost subconsciously since I was very young. Because I have light skin I have the privilege of passing, and that’s become less and less tolerable to me.

How early did you know you were mixed race?

The whitest of the white, Northern European—

But also Irish Catholic, which was not white until it suited white power to enfranchise them into the game. From a very young age she insisted on my blackness. She saw what was coming. My father is a black man. He looks like a black man and he’s always been around, but it never occurred to me that I was a black man. I remember being five—it’s one of my earliest memories—holding up my hand and looking at it and saying over and over again, “I’m black! I’m black? I’m black.” With my mom’s words ringing through my head and this fact of my body not jiving with those words and trying to reconcile that.

I noticed a question mark in that statement—

Can you talk about some of your experiences in the theatre, specifically, as a mixed race person?

It’s very strange. I’ve only gotten comfortable with it in the past year. It’s been a big year for me in terms of understanding of my own race. There’ve been certain theatres who relate to me as a black actor; they call me in for black roles, which is very awkward for me. When I say black roles I mean roles that are defined by their ethnicity, like Donald in You Can’t Take It with You. When I go in for that audition, there’s an expectation that I’m gonna “black it up” for that audience, because I know who Donald is in this world, and I don’t talk like a black man from the 1940s. I know what they want, but the weird thing about that kind of racial thinking is you can’t talk about it.

There was another theatre that called me in for a Muslim character. It was gonna be my first audition there and I turned it down, because I knew if I took that first audition as a Muslim character defined by his ethnicity and religion I was gonna be on their ethnic list. I said to the casting director, “I’d be happy to audition for this role after I’ve auditioned for Jack in The Importance of Being Earnest, or Hamlet. After you see what I actually do then I’d be happy to be considered for these roles, but if this is where I start there’s no hope of being able to break out.

Do you find that your white identity offers you more enfranchisement, or does your mixed race background makes you doubly disenfranchised?

Oh, I’m totally privileged. I didn’t inherit some of the systemic wealth—my family is a working class family, so I inherited those economic concerns and I’m not super privileged in that sense—but in terms of walking through the world, I’ve never had the experience of being a suspect in a grocery store, never been followed by someone who thought I was a thief. When I get pulled over by the cops it never even occurs to me there’s any danger. I don’t live in fear of the police, in fear for my safety. So in that sense I’m entirely privileged as a white man.

But I have a black father and siblings who do not pass. I grew up with a very visceral understanding of the struggles of people who are maybe a shade darker, who have curlier hair or a broader nose, who are very close to me who have dealt with some shit that I just haven’t.

Then you write a play commenting on whiteness from outside of it. I’m almost confused as to how to approach it. As playwright are you the “other”?

I can speak for both; that’s the unique position of being a mixed race person who can pass. As a playwright I feel like I’m talking from inside of whiteness. Most white people aren’t able to see their whiteness and hold it at arm’s length, whereas I’m able to observe it from all kinds of angles because it isn’t who I actually am. It’s a game I played to advance myself in the world.

Have you consciously ever concealed your blackness?

I come from a working class family from the Twin Cities in Minnesota. I dropped my accent, I talk differently than a lot of the people in my family. I’m not so much hiding my blackness as I’ve constructed an identity that hides my working class roots. But the funny thing about that is I still have the privilege of dining out on my working class background, my mixed race background, because I then get to show the world how far I’ve come, how much I’ve transcended. That’s the icky part of it, that I’ve played the game of whiteness, but look where I came from and how far I’ve come. That’s something I became aware of in college and I stopped doing that because it’s completely disingenuous and self-serving.

You don’t seem apologetic about it. It seems like you’ve come to grips with it.

I can’t think of a better time in the past decade in which these discussions could actually make a difference.

I’m very excited about the timing of this production. What’s happening is so challenging and painful. This is why I’m writing a comedy, because no one wants to go in the middle of the summer and sit in a theatre and feel super guilty about their whiteness, right?

It’s a summertime romp about our nation’s most thorny issue!

It is! I face it with honesty and a huge amount of humor. And I’ve been delighted with the cast and how much humor they’re finding in the material. Because it really is a summer play! [Laughs]

You’re working with one black woman and the rest of the cast are white. Have you witnessed any evolution of the analysis of the white cast through this?

Of course, there’s a generally very high understanding of the material and of what the play is setting out to achieve. What the play offers is a lot of obvious and also really subtle demonstrations of white privilege. The way everyone relates to the black woman who dies in the play—and that’s not a spoiler, that’s the whole point of the play. Her death exposes the way white people talk about race and don’t talk about race, the way they continually focus their attention on themselves and their own comfort.

It’s a fantastic cast and they get what it’s about. I’ve littered the play with moments of white fragility, and rather than talk about it, we just point it out.

Everyone understands that the only way for this play to work is not to make fun of white people. We’re not making light of white people, because it’s a challenging space they’re in right now. This play is honestly presenting, in a way that exposes with humor, how painful it can be to be white. That’s a very important thing to explore, the suffering of whiteness, the unworkability of it. This is a thing that’s got us all in its grip. It’s a structure that’s bigger than any of us and it’s playing us all for fools.

I don’t think that middle class white America understands how much sacrifice it takes to support something as unnatural as an all-white community and how much they’re missing out on in terms of vitality and self expression. That’s why the play presents the ultimate white community in comic terms. It’s really important that I point out it’s a comedy!