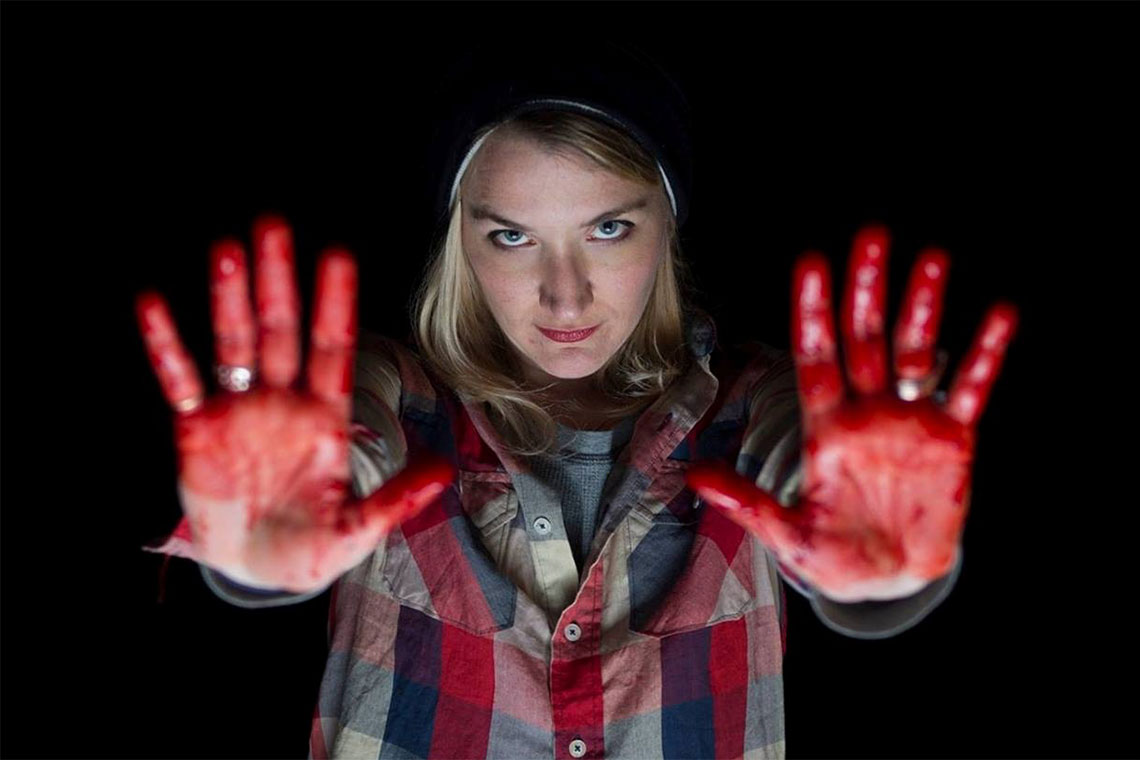 Julia Griffin is all over the Seattle theater scene. She’s the casting director and artistic associate for Theater Schmeater, she’s directed for the likes of Annex and Seattle Public Theater and she’s acted in productions for GreenStage, Driftwood Theater and more. She’s also a blood consultant. That is to say: she’s someone who makes stage blood and makes it flow on stage using all sorts of tools, gadgets and theater magic. Currently she’s blood consultant for Seattle Shakespeare’s new production of Titus Andronicus. The show is pretty violent, and this pleases Griffin.

We recently sat down with her to talk blood making, catheter bags and how much blood flows when someone gets shot in the stomach.

How does one become a blood consultant?

It’s pretty random, I know. I took makeup classes in college. I liked gross bloody stuff for a long time. I would watch surgery shows in high school. Like, documentaries of surgeries. In college I took those classes and started doing zombie makeup—that was fun. When I started working at Theater Schmeater I did a lot more zombies. I was involved in a lot of GreenStage’s Hard Bard productions. Those are ridiculously bloody.

What is a blood consultant?

We make the blood flow on stage. I never thought at my age I’d buy so many catheter bags.

Do you have any sort of medical background?

I watched horror movies and watched a lot of YouTube videos. So… no.

What is stage blood?

Blood powder. It’s just stage makeup. Combine powder with corn syrup and water and you have blood. It works better than, say, Kool-Aid or food coloring. For one, those things stain. I go up to the Display & Costume store and buy them out of stock.

What other supplies do you need?

Blood packs are just Saran wrap. I also use a lot of syringes. Catheter bags. Those nose bulb sucker things you use on babies.

What is your favorite aspect of stage blood?

The reaction of it when it works, on stage and off. When an actor gets blood on their hands it’s visceral. It’s real. Even though you know it’s fake, it FEELS real. It’s awesome to watch actors react to it in a very real way, and the audience, too.

What is the most challenging aspect of stage blood?

It’s how to hide the apparatuses. An actor needs to know how to hold it, how to use it at the right time, how to pop the blood pack. It can be pretty tricky and when an actor is already nervous on stage, it’s challenging for them, sometimes, to make sure the audience doesn’t see a tube or something. To keep it hidden is key. Also, it’s a bummer when the blood goes off before it’s supposed to.

What can we expect, blood-wise, in the Titus Andronicus?

I can’t tell you. But I CAN tell you it’s going to be gross. My favorite kill I’ve ever done on stage was in a production of Reservoir Dolls [an adaptation of Quentin Tarantino’s Reservoir Dogs]. It involved Black Cats—I don’t think they’re even legal—and when it happened, blood went EVERYWHERE. Smoke curled off her chest. It was so cool looking.

Are you ever concerned of there being TOO much blood?

I’m NEVER concerned about over-bleeding. The more blood the better! I DO know how much blood a body spills when they get shot in the stomach; I’ve looked it up. I know when an artery splits how long it spurts. You want enough blood for the audience to react to it. Obviously, if you have a paper cut on stage, you’re going to bleed more than in real life. The audience has to see it.

How easy is stage blood to clean up?

OxiClean™. Soak costumes in it and we’re good as new. Or just wash them if they’re not too bloody and they’re fine. The blood on stage takes a little more effort to clean. It’s usually just a combination of bleach and water.

Is OxiClean™ what we should use, then, to clean up real blood?

Fortunately, I’ve never had to clean up large pools of blood. But, probably that’d do the trick.

What’s next for you in regards to blood consulting?

The Dutchess of Malfi coming in February with GreenStage.