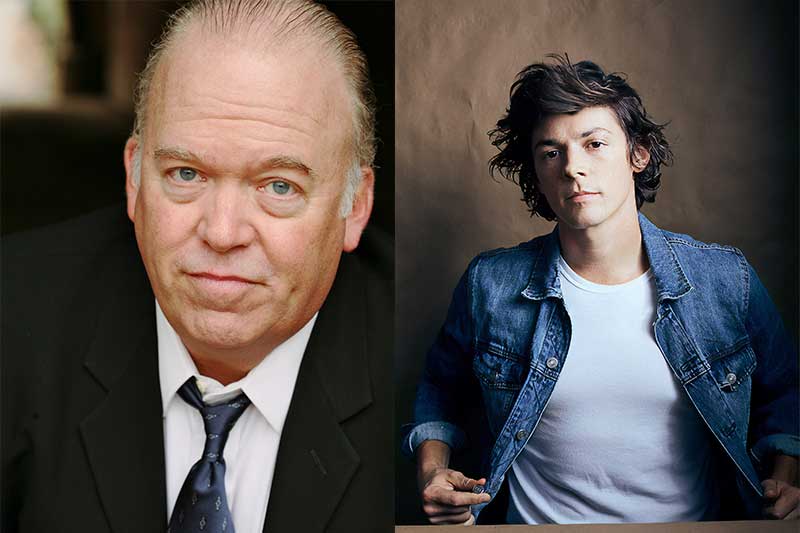 The show will feature music created and inspired The Avett Brothers, a Grammy nominated folk rock band, and is written by Tony Award-winning and Academy Award nominee John Logan (Red, Broadway’s Moulin Rouge!, Skyfall, Gladiator). Logan is joined by director Michael Mayer who has a successful history of helming new musicals including Spring Awakening, for which he won the Tony Award for direction, American Idiot, and the first Broadway production of Hedwig and the Angry Inch.

Swept Away takes place in1888, off the coast of New Bedford, MA. When a violent storm sinks their whaling ship, the four surviving souls—a young man in search of adventure, his older brother who has sworn to protect him, a captain at the end of a long career at sea, and a worldly first mate who has fallen from grace—each face a reckoning: How far will I go to stay alive? And can I live with the consequences?

Wayne Duvall (Captain) Duvall will be making his Berkeley Rep debut with Swept Away. Theatre credits include Broadway: 1984; Off-Broadway: Big River and Of Thee I Sing (Encores), The Legend of Georgia McBride (MCC Theater); Regional: The Cake (La Jolla Playhouse), Pride in the Falls of Autrey Mill (Signature Theatre), Bright Star and Working (The Old Globe), Bonnie and Clyde (Asolo Rep and La Jolla). Film credits include Richard Jewell; The Kitchen; American Animals; Wolves; Hello My Name Is Frank; Prisoners; Lincoln; Edge of Darkness; Duplicity; Leatherheads; In the Valley of Elah; Pride and Glory; O Brother, Where Art Thou?; Hard Rain; The Fan; Apollo 13. Upcoming films: A Quiet Place 2, The Trial of The Chicago 7, The Hunt, and Werewolves Within. Over 100 TV guest stars, including Pearson, Suits, One Dollar, The Code, Sneaky Pete, Fargo, BrainDead, Madam Secretary, Gotham, The Leftovers, Hell on Wheels, Elementary, Person of Interest, The Good Wife, all the Law & Orders, Hawaii 5-0, Boardwalk Empire, The West Wing, The District.

Adrian Blake Enscoe (Little Brother) Since graduating from Carnegie Mellon’s undergraduate acting program, Enscoe has made a name for himself by landing roles in Carter Smith’s indie film Jamie Marks Is Dead, opposite Cameron Monaghan and Morgan Saylor, as well as HBO’s Girls, and on the hit Netflix show Orange Is the New Black. He played opposite Catherine Keener and Anton Yelchin in their indie feature The Greens Are Gone, and had a strong supporting role in Owen Long’s indie film Seeds. When not acting, Adrian moonlights as lead guitar and vocalist in the trio Bandits on the Run, with whom he recently wrapped up a local tour. Adrian can currently be seen starring opposite Hailee Steinfeld as Austin Dickinson in the Apple TV+ breakout hit Dickinson. He is based in Brooklyn, NY where he is very active in theatre.

Stark Sands (Older Brother) Sands most recently appeared on Broadway in Aaron Sorkin’s adaptation of To Kill a Mockingbird opposite Jeff Daniels. Prior to that, he was nominated for a Tony Award and received a Grammy Award for originating the role of Charlie Price in the Tony Award-winning musical Kinky Boots. Recent film credits include Steven Spielberg’s The Post opposite Tom Hanks and Meryl Streep, the Coen Brothers’ Inside Llewyn Davis with Oscar Isaac and Carey Mulligan, and Clint Eastwood’s Flags of Our Fathers opposite Ryan Phillippe and John Slattery. He was most recently seen on television as the lead of the FOX series Minority Report. He made his Broadway debut in Journey’s End, for which he received his first Tony Award nomination and won the 2007 Theatre World Award before going on to star in Green Day’s rock musical American Idiot.

Ebrin R. Stanley (Ensemble) Stanley is an actor, singer, songwriter, and producer from Houston, TX. He graduated from the University of South Dakota with a BFA in Musical Theatre and a minor in Dance. He released his debut album, For The Lovers and The Heartbreakers, on all streaming platforms last September and was most recently seen as Hercules Mulligan/James Madison in the Chicago company of Hamilton.

John Logan (Book) Logan received the Tony, Drama Desk, Outer Critic Circle, and Drama League awards for his play Red. This play has had more than 400 productions across the U.S. and over 160 foreign productions in 25 languages. He is the author of more than a dozen other plays, including Peter and Alice, I’ll Eat You Last: A Chat with Sue Mengers, and Never the Sinner. Musical theatre work includes Moulin Rouge, The Last Ship, Superhero, and Swept Away. He is the proud recipient of the O’Neill Theater Center’s 2019 Monte Cristo Award. As a screenwriter, John has been three times nominated for the Oscar and has received Golden Globe, BAFTA, WGA, Edgar, and PEN Center awards. His film work includes Skyfall, Spectre, Hugo, The Aviator, Gladiator, Rango, Alien: Covenant, Genius, Coriolanus, Sweeney Todd, The Last Samurai, Any Given Sunday, and RKO 281. He created and produced the television series Penny Dreadful and Penny Dreadful: City of Angels for Showtime.

The Avett Brothers (Music and Lyrics) The Avett Brothers​ made mainstream waves with their 2009 major label debut, ​I and Love and You​, landing at No. 16 on the ​Billboard​ Top 200 and garnering critical acclaim. 2012 saw ​The Carpenter​ hit No. 4 on the ​Billboard ​Top 200 and was followed by ​Magpie and the Dandelion (2013) which debuted at No. 5 on ​Billboard’s ​Top 200 and saw the band appear twice on ​Jimmy Kimmel Live! True Sadness​ (2016) achieved The Avett Brothers’ highest career debut to date hitting No. 1 on ​Billboard’s​ Top Albums Chart, No. 1 Top Rock Albums Chart, No. 1 Digital Albums Chart, No. 3 on ​Billboard​ Top 200, and scoring two GRAMMY​®​nominations. In the same year, the band was inducted into the North Carolina Music Hall of Fame. In 2017, the band released their critically acclaimed documentary ​May It Last: A Portrait of The Avett Brothers​, which was co-directed by Judd Apatow and Michael Bonfiglio. The film followed the band as they wrote their GRAMMY​®​ nominated album ​True Sadness​. Last year, the band released their tenth studio album ​Closer Than Together​ featuring new single “High Steppin’” which reached #1 on the Americana Radio Chart.

Brian Usifer (Music Supervisor, Music Arrangements, and Orchestrations) Usifer is a New York City-based music director, pianist, orchestrator/arranger, producer, and composer and is currently the music director of Disney’s Frozen on Broadway. He is also currently the associate music supervisor of The Book of Mormon on Broadway and on tour. Prior to that he was the music director of Kinky Boots on Broadway, which won six Tony Awards including Best Musical, Best Score, and Best Orchestrations. The cast recording won the 2013 Grammy Award for Best Musical Theatre Album, and the West End production won an Olivier Award for Best Musical. He was the associate music supervisor as well for Kinky Boots on tour, London, and in Toronto. Brian has played in the Broadway and off-Broadway orchestras of The 25th Annual Putnam County Spelling Bee, Avenue Q, Altar Boyz, and The Book of Mormon. Credits also include Chess at the Kennedy Center and more than five years of regional theatre including Follies at Barrington Stage Company. Concerts include Bobby and Kristen Lopez: American Songbook at Lincoln Center and Clay Aiken “Tried and True DVD,” for PBS.

Rachel Hauck (Scenic Designer) Berkeley Rep credits include What the Constitution Means to Me, The Madwoman in the Volvo, Roe, It Can’t Happen Here, An Iliad, Mother Courage, Antony & Cleopatra, and Valley Song. Broadway credits include Hadestown (Tony Award, Drama Desk and Outer Critic Circle nominations), What the Constitution Means to Me, and Latin History for Morons. Recent work includes The Wrong Man (MCC), Hadestown (National Theatre, Citadel, New York Theatre Workshop), Hurricane Diane (NYTW), Othello and Twelfth Night (Shakespeare in the Park), The Lucky Ones (Ars Nova), You’ll Still Call Me by Name (Sonya Tayeh/Jacob’s Pillow), Tiny Beautiful Things and Dry Powder (The Public Theater), Amy and the Orphans and On the Exhale (Roundabout Theatre Company), and Antlia Pneumatica and Grand Concourse (Playwrights Horizons). Rachel is honored to have received the Princess Grace Award and Lilly Award, Drama Desk and Lortel nominations, and an Obie Award for Sustained Excellence.

Swept Away will end Berkeley Repertory Theatre’s 2019-20 season and play from June 14 to July 26. Tickets are available online.