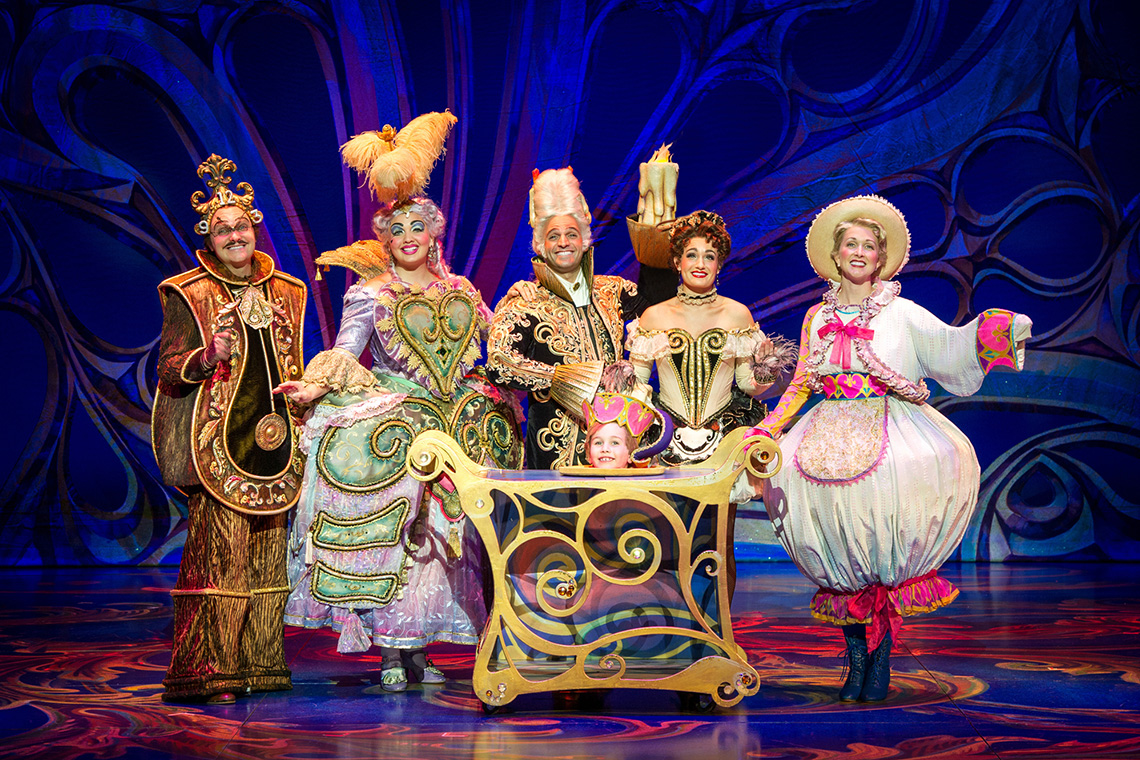 Cast of Disney's Beauty and the Beast Amy Boyle

Seattle Theatre Group presents Disney’s Beauty and the Beast at the Paramount Theater October 21 through 26. Based on the acclaimed 1991 film, it features many of the original songs (“Be Our Guest” OF COURSE) as well as several new ones.

There are many reasons why Beauty and the Beastbecame one of the most beloved of Disney’s already widely cherished catalog of animated features: great songs, stunning visuals, great songs, “Be Our Guest,” more great songs. But it also marked a turning point in the way Disney portrayed female protagonists. Disney “princess” movies have long been criticized for presenting regressive role models for girls. More recent Mouse House movies like Tangled, Brave and Frozen have subverted this perception, presenting stronger female characters who behave more like real people with stronger motivations than “I need to be rescued” or “I need to find a husband” or “I need to be rescued by someone who will then become my husband.”

I re-watched a bunch of these movies to see how the Princesses have evolved over the past seventy-seven years.

Before I get into the nitty gritty of Snow White and the other weird, nonsensical early features, let me first say that if you haven’t seen these old movies in a long time, you should watch them again. However, I wouldn’t recommend watching all of them over the course of just two days like I did—the experience left me feeling a little unstuck from reality. These movies were made in the glorious days before proper labor laws made it way too expensive, impractical and cruel to make animation as gorgeous as Snow White. There are images in this film that are absolutely breathtaking.

Which is great, because the story itself is fairly nuts. Fairy tales, it seems, were all written during a time when everyone was constantly drunk because drinking water was poisonous. Snow White, one of those classic abused princesses with evil stepmothers who seem to make up such a large portion of medieval Europe’s population, bears little resemblance to an actual person. She seems nice. She sings to animals—A LOT. She’s good with household chores. That’s about it.

In Disney’s defense, nobody else is a strong, rich character, either. If you think Snow White is a shallow caricature of her gender, you should get a load of “The Prince.” I think that’s actually his name. He’s handsome. He’s a Prince. He has a nice voice. He is nice. That’s the character for you. Character development simply wasn’t much of a priority with these early animated epics. I mean, you learn all you need to learn about the Dwarfs by their names alone. Grumpy’s grumpy. Sneezy sneezes. (What kind of personality trait is “sneezing”?) Doc seems like a good guy.

This is one of those movies that makes you wonder about the objective of children’s entertainment in the first place. What are these stories supposed to be telling kids? This goes for fairy tales in general. Why did I have to hear the story of Goldilocks and the Three Bears so many times? Was it to learn not to break into people’s houses? Or at what temperature to properly enjoy food?

Cinderella also seems like a really nice person. She’s basically enslaved by her horrible family, but she still has a winning attitude and—like Snow White before her—enjoys a hearty endorsement from the animal kingdom. Then, when things are looking bleak, magic comes and saves her because she’s nice, and a powerful man chooses to marry her because she’s pretty. Girls: keep on smiling, because magic and men will save you if you’re a gorgeous and polite doormat! Am I oversimplifying? I really don’t think I am.

I love most of these movies despite their antiquated weirdness, but this one really pushed my buttons with its fetishization of glossy, regal opulence and its direct conflation of outer and inner beauty. In the world of Cinderella, ugly people are bad and beautiful people are good. I resent that.

Twenty-two years after Snow White and it seems like we still haven’t come very far, doesn’t it? The namesake and climax of this movie revolve around a pretty princess who can only be saved by a man coming by and kissing her to bring her out of the loveliest coma of all time. It’s still just hunks rescuing ladies. By this point, however, the characters are beginning to seem more like, well, characters. Princess Aurora is nice and beautiful and has excellent posture and does all of the requisite singing to animals required of a troubled, high-ranking member of the nobility. What’s different is that she actually seems to have a sense of humor, mischief and imagination about her. Compared to Snow White, she’s a veritable fount of personality. Sure, she’s boy-crazy enough to dance with an owl and a squirrel dressed like a man, but who isn’t at that age?

It took Disney 30 years to get around to making another Princess movie. After thirty years of lesser classics like The Aristocats, The Sword in the Stone and The Black Cauldron, the studio finally got back to doing what it does best: giving little girls costume ideas for Halloween. Things haven’t changed all that much in three decades. Princess Ariel is nice, sings to animals and needs a man for fulfillment, but there’s a lot more agency to her story. She really has to go to great lengths to hook up with her hunky prince. She’s doesn’t just wait for him to invent the aqualung and come down to marry her. She makes a stupid deal with an obviously evil sea-hag, leaves her whole family, loses the ability to talk, gains legs and is naked in public just enough to give me odd stirrings when I was 10. In other words, she earns her prince.

However, as a genuine, red-blooded American, I tend to get irritated by the infatuation with royalty in these movies. Why can’t Ariel fall in love with, say, John Quincy Adams, or some other beacon of representative democracy instead? And don’t say “because that’s what happens in the book” because of course you’d be right.

We made it! Now, just to be perfectly accurate, Belle (last name not provided, let’s just say it’s “Kowalski”) doesn’t begin the film as a princess, but she does end the movie as one (spoiler!). She’s a bookish, strong-willed young lady who lives with her (non-King) father and sings songs about wanting more. She rejects the advances of the hunky alpha male who the villagers idolize. Far from the patient doormats of the early movies, Belle isn’t taking crap from anybody.

Eventually, however, she has to go live in a magical castle with a horrible (looking) monster for reasons too complex to get into here. Then the whole Beauty and the Beast story that you’re no doubt aware of by now plays out. What I like about this one is that, yes, it ends with the lady finding her man, but only after she saves his life. That’s different! Wait, no. That happened in The Little Mermaid, too.

The other bonus is that this movie flips the script on the ugly=bad, pretty=good lessons from Cinderella. Although after Belle figures out she loves The Beast despite his ghastly appearance, he does turn back into an impossibly gorgeous man. So that muddies up the moral just a bit. But hey—“Be Our Guest”!

Everything After Beauty and the Beast (1991-present)

Disney has been getting better and better at presenting fully realized and independent female characters, some of whom aren’t even related to hereditary rulers! Mulan is an action hero. The Princess and the Frog cleverly tinkers with the idiotic “Princess and the Frog” fairy tale, Tangled has a kick-butt Rapunzel, and don’t even get me started on Frozen, in which the whole “True Love Saves the Day” trope is updated with a wonderful twist… okay, that might be a genuine spoiler.

The female characters in these more recent movies are unquestionably stronger and more fully realized than their classical counterparts. Watching all of these these movies in chronological order is kind of like stepping out of a fog—things feel like they’re starting to make more sense. It’s a feeling which is particularly important when you watch eight Disney cartoons in two days. You don’t want to come out of that kind of ordeal with nothing more than bizarre dreams and the profound urge to sing to animals.

Disney’s Beauty and the Beast runs October 21 through the 26 at the Paramount Theater.