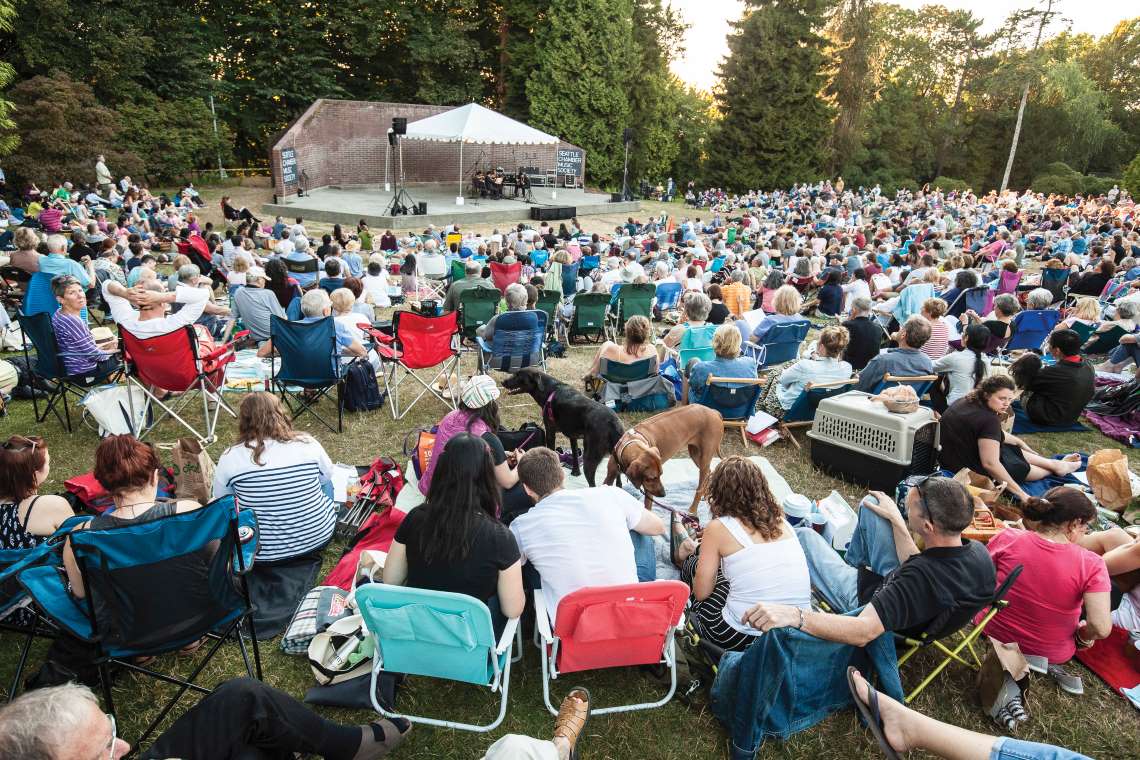 A lovely evening out. Photo by Tom Mark Photography

Living in Seattle means living for the summer. Between hiking, biking and visits to the city’s incredible beaches and lakes, it’s easy to fill every evening and weekend with glorious outdoor activities. But while you’re solidifying your summer schedule, don’t forget to make room for the arts.

Several intrepid Seattle arts organizations program their summers around the great outdoors, taking advantage of public spaces to bring art to the entire city. The Seattle Art Museum programs a biweekly concert and arts series at the Olympic Sculpture Park in Belltown, aptly named Summer at SAM. GreenStage produces the Seattle Outdoor Theater Festival at Volunteer Park in Capitol Hill each summer, a festival that boasts sixteen performances on three stages across the park. And the Seattle Art Fair takes over the CenturyLink Field Event Center every August, attracting local and national art aficionados alike.

I had the opportunity to speak with the artists behind three of our city’s most anticipated outdoor performances: Wooden O’s productions of King Lear and The Merry Wives of Windsor, Seattle Chamber Music Society’s Chamber Music in the Park and Common Area Maintenance’s inaugural puppetry production. Don’t forget the sunscreen!

George Mount, artistic director of Seattle Shakespeare Company, started Wooden O twenty-five years ago as a way to reconnect with his Pacific Northwest roots. The Mercer Island native noticed that the island’s annual summer festival, Mostly Music in the Park, was entirely music in the park. Eager to bring outdoor performance to his hometown, Mount solicited the Arts Council of Mercer Island for a grant to perform Shakespeare at the Luther Burbank Park Amphitheatre—just three nights of Much Ado About Nothing to justify the “mostly” in the festival’s title. Twenty-five years later, Wooden O has expanded its scope to include parks across the Puget Sound region. But one thing remains the same all these years later: the festival opens and closes at Mercer Island’s Luther Burbank Park Amphitheatre.

I had the opportunity to speak with George Mount about the significance of Wooden O’s twenty-five year anniversary and his role as director of this summer’s King Lear.

“We’ve never done it outside,” Mount said of Shakespeare’s tragedy. “It’s a monster of a play and an audacious choice to present in the summer under two hours. But Wooden O was pretty much started as an audacious endeavor.”

Mount pointed out that King Lear’s cynicism makes it the perfect play for 2018.

“So many of the people act out of venal self-interest and casual disregard of others around them,” Mount said. “I worry about that behavior when I look at our politics, our consumerism, digital isolation, tribal isolation and ideological insulation.”

Actor Vanessa Miller’s Wooden O connection is longer than the festival’s history. Miller attended Mercer Island High School with George Mount and when he asked her to return to Washington to play Beatrice in Much Ado About Nothing, the decision was simple.

“I really think that free theatre is important,” Miller said. “When I was a kid, I remember seeing some park shows produced by Empty Space. Watching those shows changed my life, inspired me to follow a path into theatre.  It only takes one beautiful summer evening in front of a happy crowd of people eating picnic dinners, laughing or listening to the beautiful poetry, to get hooked for life.”

She loves the community aspect of Wooden O and the way the actors truly connect with the audience. And she’s always aware that she could be part of an audience member’s first Shakespeare experience.

“Our job as actors is to be very specific with the language and the relationships,” Miller said. “If we know what we’re saying, and we act with intention, then it clicks for the audience too. If we, as actors, are bluffing it, or generalizing, then it’s really hard for the audience. Plus, Wooden O shows are very physical and lively. It’s not an academic experience.”

Reginald Andre Jackson made his Wooden O debut eighteen years ago and says that there’s nothing like performing Shakespeare outdoors. He loves seeing audience members reclined on a blanket, enjoying a bottle of wine and a cheese plate or sending their kids off to play as they enjoy the performance.

“Every now and again, nature will come in and lift the play in unexpected ways,” Jackson said. “We took Macbeth to Walla Walla. One night during dusk, bats began to swoop and circle in a feeding frenzy near the trees that surround the stage. Wooden O has hired some pretty great designers. But nature—she is queen.”

George Mount left me with some words of advice for audience members who are hesitant to give Shakespeare a try.

“Wooden O was founded on the conviction that Shakespeare’s plays are popular entertainment,” Mount said. “That’s been a driving force in how we approach the plays. Shakespeare’s plays entertain the whole person. The language challenges the brain. The romance lifts the heart. The pathos hits the gut.”

Mount added that even if a play isn’t to an audience member’s liking, they still spent two hours in a gorgeous Seattle park, with a picnic dinner, surrounded by friends and family. Who could ask for a more perfect evening?

King Lear and The Merry Wives of Windsor run July 12 to August 12 in parks throughout the Puget Sound region.

On a walk through Capitol Hill’s gorgeous Volunteer Park one summer, James Ehnes, director of the Seattle Chamber Music Society (SCMS), and his wife Kate, came across a small stage perfectly sized for a chamber orchestra. She suggested that Ehnes program a summer concert in the space and Chamber Music in the Park was born.

“Bringing this music, for free, into Seattle parks has been a wonderful way to spread this beautiful music to listeners from all over the city who might not have the chance to hear us downtown at Benaroya Hall,” Ehnes said. “It’s tremendously gratifying to see all the families and young people that attend these events in the parks.”

“Everyone had a really fantastic time,” Ehnes said, “and it was very meaningful and moving to see so many cross-sections of Seattle represented in the group—people of different genders, ethnicities, ages and backgrounds, all sharing in the joy of music.”

Violinist Amy Schwartz Moretti loves performing in any venue, but whenever she performs outdoors she feels a deep connection with the world and the lives around her.

“One of my favorite memories of a Volunteer Park concert was during a performance of the Dvorak Viola Sextet,” she shared. “I had a moment when I wasn’t playing for a few measures where I was so taken by the beauty of the scenery and music-making. I saw an airplane flying over carrying people to their various destinations, heard children laughing and dancing, and just had a general sense of all being right with the world.”

“The nice thing about it is that parents can bring their children without worrying about upsetting anyone if they get a little restless,” Keefe said. “People can enjoy the weather and maybe a picnic while they listen to us play. It’s very fun for the performers and it’s something I look forward to every summer.”

Chamber Music in the Park is on Saturday, July 28 at Volunteer Park. Visit seattlechambermusic.org for more information, including information on how to register for the community play-along.

When Alexander Mostov joined Common Area Maintenance (CAM), a community gallery and generative studio in Belltown, he was looking for an inspiring workspace where he could interact with fellow creatives. In the years since, CAM has provided much more than that community. It’s become a space where Mostov, an artist who works primarily in two-dimensional gouache and computer illustration, can challenge his work and experiment with new forms. Which is how he came up with the idea to produce a puppet show that audience members can view from the sidewalk.

The puppetry performance will be the first of its kind in this space, but one that has the potential to become an annual summer tradition.

“I saw a traditional puppet show while I was studying abroad in Barcelona and was totally inspired,” Mostov shared. “I love magic realism and the idea of injecting fantasy into one’s everyday life. There’s something about puppetry that lends itself to that everyday fantasy.”

When I asked him what he was looking forward to the most about this collaborative art form, Mostov shared that he’s excited about merging his own visual style with the aesthetics of artists who work in other mediums. For example, how will an artist who works primarily in sound enhance the script?

When Mostov and I spoke in the spring, he was in the process of assembling a team and writing the script, in collaboration with two other CAM artists.

Common Area Maintenance’s puppetry performance will run May through June at their space in Belltown.

So, pack a picnic and a wide-brimmed hat. Because whether you’re a puppetry fan, a Shakespeare fiend or an orchestra aficionado, there’s a performance for everyone this summer in Seattle.