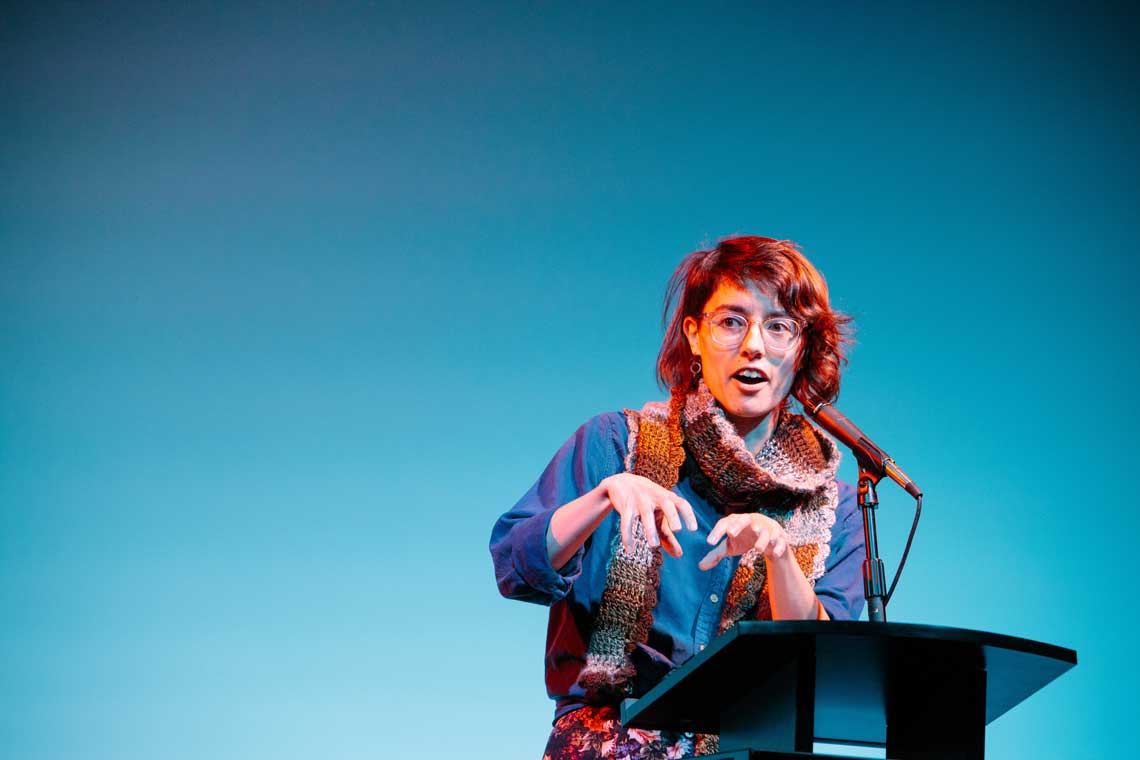 Seattle Rep is launching an annual Native Artist-in-Residence program and Arianne True is the first awarded the residency. “I love that Seattle Rep is really focusing on having it be relational. I think that’s really important and really exciting to me,” True said.

Nabra Nelson, the director of arts engagement at Seattle Rep, is excited about the relational aspect of the program, too. Nelson kicked off this project in September 2021 amidst a flurry of new Equity, Diversity, and Inclusion (EDI) initiatives at Seattle Rep, and she is running it with the express intention of building relationships.

Nelson was very intentional about the way she created the program—she centered support and relationships first and did it all with a keen eye on our national history and the greater context of the work. “We’re really trying to work on relationships with our local Indigenous communities,” Nelson explained, “and really examine our history of exclusion, and colonialism, and respond to that in some way and learn through our response in many ways.”

These are much more than just words: she eagerly anticipates changes in the program and has concrete plans for how to encourage and respond to feedback from the artists, both those who apply for and those who are awarded the residency.

In the application for the residency, it was made clear that the program is going to evolve with input from the artists and that Seattle Rep is open to continually changing the program. Nelson shared, “There’s even a question in the application of ‘Do you have any feedback about this application?’ And there are already things that I’ve learned even before I had my first meeting with Arianne, that we’re going to be shifting a little bit in the application process. So it’s constant learning, but you’re never going to learn if you don’t try.”

Not only is the Native Artist-in-Residence program relationship centered and open to change, it is also adaptable to as many different circumstances as its Awardees desire. All artists are offered a budget, and then, in Nelson’s words, “they can use that $10,000 however they want to, and we provide artistic support, and we provide our PONCHO space, if they want to use that for a showcase. And the only requirement of the program is that they do some type of showcase at the end of the season.”

The showcase is just as structurally free as the rest of the program. It can be public or private: widely advertised to any communities the artist intends to reach or take the form of an invite-only event for selected individuals. The genre and medium of the artist’s work are similarly unconstrained (non-theatre art creators are encouraged to apply as well, all regardless of formal experience), and the program is set up to be as open, accessible, and ultimately as inclusive as possible.

As Nelson said, “It’s really all about the artists, their vision, and their professional development. It’s super open ended.”

For Nelson and Seattle Rep, it was imperative that the program be as unrestricted as possible because of the historical context of interactions between institutions and Native peoples. As shared in Nelson’s words, “We acknowledge that there’s a history of tokenization and exploitation of Native folks by White folks and White institutions for the benefit of the institution, and we wanted to make sure to avoid that as much as possible.” Nelson is so conscious of this historical (and, in many ways, contemporary) exploitation that she notes that it “may not be fully possible to fully avoid as a PWI (Predominantly White Institution).”

True agrees that it is crucial to combat this pattern. “There has been, historically [lots of] external gatekeeping around Native work and Native art,” True pointed out. Non-Native people in positions of power, judging Native art, have long controlled the dominant narrative around what kinds of art get funded and published. In many cases, True said, art from Native creators has been deemed—by White institutions—as ‘not Native enough,’ which is a huge part of the continual marginalization and exploitation of Native identities. True stated that it is very “important [to] push back against that” by showing that “I don’t have to have any kind of theme. I don’t have to use any kind of words or images in my artistic work for it to be Native. It just has to be made by me.”

The work that Arianne True is doing as Seattle Rep’s first Native Artist-in-Residence is an exploration of experimental poetry that will eventually be published as a compilation, “Exhibits,” but first will manifest in the PONCHO space as a showcase that is “basically trying to recreate a museum in as much textual fidelity as possible,” True explained. “My dream is for the reader to feel like they’re walking around the museum, but it’s made of text.” And this museum is carefully attuned to the viewer’s experience. “I want them to feel how the museum is talking back to them.” Not just through the individual exhibits but also through curatorial notes that remind you to “pay attention to how you’re looking” at pieces such that “you have a lot of choice in how you read them,” True said.

True started out in slam poetry and through this developed a deep understanding of the connection between writer and audience, keying into when “a poem is really landing and you’re vibing with the audience, you can feel, sometimes, how you have them,” True shared, and how you can “draw and focus and measure attention.”

Now, through “Exhibits,” True has taken on an ambitious project: through a distinctive form of structurally experimental poetry, every reader can have a very distinct experience of interacting with the art. “As a reader, you get to choose what makes sense to you and how you read [the poems],” True explained. “There are notes that talk to you, from the voice of the curator, that encourage you to stay aware of what choices you’re making around the reading, and how you’re moving through the space and remembering that your reading is an active thing. It’s not this passive thing you’re doing.”

Arianne True wants to invite the greater public to this “highly performative installation art within a totally textual space,” but True also appreciates the open-ended aspects of the showcase and the residency as a whole. “It’s really cool that the Rep is very specific,” True said, about the fact that “this is your event, you choose what it is.”

The thing that I most hope other organizations will get excited about and want to try more is focusing on relationships instead of transactionalism.

True also appreciates the relationally-focused aspect of the residency as a whole and said, “The thing that I most hope other organizations will get excited about and want to try more is focusing on relationships instead of transactionalism. And having more unrestricted funding, but with support for the artist.” This program, True pointed out, “has a lot of support built in [and] it’s so human. Artists aren’t like these divine inspired beings. We’re just like regular people who are making stuff. I feel like sometimes people forget that if they’re not close to a lot of artists; we’re really just extremely normal people. When we’re not making art, we’re doing all the other things: I still go grocery shopping. I still mess things up. And I still don’t know how to do things when it’s my first time doing them.”

Seattle Rep has created an open, inclusive, responsive space to build relationships with the Indigenous community and uplift Native artists, and as True said, “They’ve been really kind, you can tell that the relationship piece is important to them.”

This piece is especially vital to Jeffrey Herrmann, Seattle Rep’s managing director, because it is much simpler to say words than to actually do the work and establish relationships. “It’s too easy to stamp words about how we support this community, those land acknowledgments are very, very easy to read off before your show and feel like you’ve actually done something. And I understand that, gotta start somewhere, and maybe those words are a place for organizations to start that journey.” But more importantly, he argued, you have to ask, “Okay, well, what real action can we take, so that it’s not just words, but it’s actual action.”

That is exactly what Nelson is working to do. She wants this program to actively uplift and support the Native artists that come through the new residency. She wants to integrate community and work to make spaces more inclusive and open. In her words, the program is meant to help Seattle Rep “really work towards building relationships and listening to the community” and then, hopefully, respond “properly to the community.”

Rosemary Sissel is a sophomore at Northwestern University and an alum of the wonderfully empowering TeenTix Press Corps, which she wants everyone reading this to tell all the young people they know about! (And to all the youngins themselves who see this: TeenTix is freaking fantastic — you get paid to go to shows and tell others how epic they are!!) When Rosemary is not doing Very Serious Academic Things or extolling the epicness of various art things, you can find her reading a book in a tree (or strongly hinting that she’s cool enough to read books in trees).