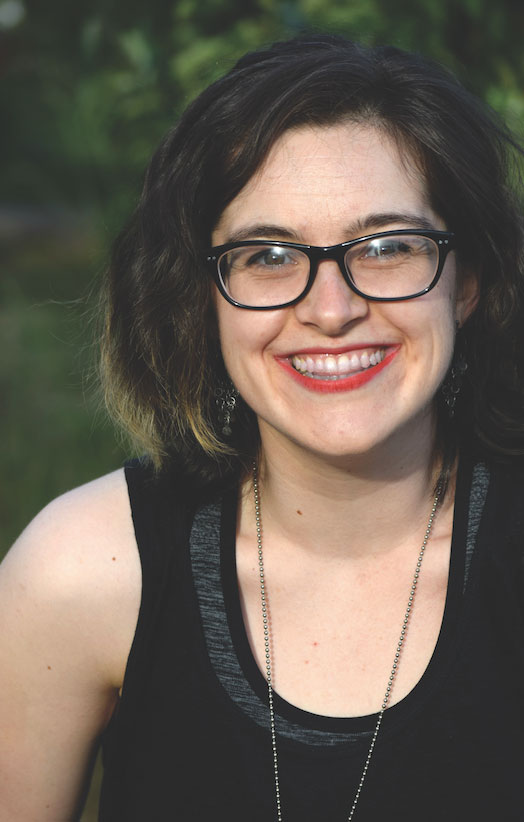 Anthea Carns is a busy woman. After pursuing a degree in dramaturgy at Carnegie Mellon University, she splits her time here in Seattle between stage managing, acting with HERON Ensemble, dramaturgy, playwriting, and Bard in a Bar, which is basically Shakespeare karaoke.

She recently sat down with us to talk nerds, obscure dirty Elizabethan-era jokes, and Shakespeare plays set in near-future rainforests.

What is Bard in a Bar?

Bard in a Bar is basically Shakespeare karaoke. I pull together a “highlights reel” of scenes from a chosen play and then get volunteer readers from the audience. They get a couple of minutes to talk together, go through my big bag of silly props and costumes, and then they read the scene. I explain all the stuff that happens in between each scene so it’s kind of a half Drunk History stand-up routine, half karaoke bar, half Rocky Horror Picture Show. It’s a lot of halves, but it’s really rooted in my feeling that Shakespeare should be fun and accessible. It’s a bit like a Shakespeare in the Park model, but with more booze—and audience participation—and heckling.

How did you get involved in the project?

There’s a great organization called Nerd Nite that hosts regular talks from folks about the things they’re nerdy about. I think I heard them describe it once as “That thing that when you start talking about it, your friends’ eyes start to glaze over? We want that.” I presented a talk with them about how to recognize dirty jokes in Shakespeare—which is actually not that hard, but there are some obscure Elizabethan English jokes that it helps to have context for—and the owner of the bar and I decided to see if we could make it into a recurring event of some kind. That was in December 2014. It’s gone through a lot of development since then, including a venue change to Solo Bar, a partnership with the Seattle Public Library, and a lot of refinement of the format.

Why does Shakespeare continue to resonate century to century?

I was just reading some great history about this! Back in the 1700s the French, the Germans and the English were all having spirited critical slap fights about whether Shakespeare had real artistic merit because he completely ignored the Aristotelian unities in favor of, you know, telling compelling stories. There is an argument that Shakespeare’s ability to incite empathy outweighed any formal flaws he had. So, there are a few elements: I think the great plots still excite us; I think his sheer prolific-ness means that there’s something for everyone; and I think Shakespeare had a real genius for creating complex, ambiguous, human characters. We keep coming back to him because we haven’t completely figured his characters out, just like we haven’t completely figured out our own human experiences.

Why do some interpretations of Shakespeare succeed while others fail? This is to say, why does one Hamlet that takes place in a 1980s shopping mall work when another, set in a near-future rainforest, doesn’t?

I’m so glad you asked me this. I’ve seen so many “high concept” Shakespeare productions where the concept just didn’t add anything. It’s just a fun aesthetic. Which is fine, but that’s as far as it goes! It forces you to ask, though, “Why are you doing this in a near-future rainforest?” What does that rainforest mean, semiotically and culturally, and how does that meaning intersect with the play’s meaning? If it’s just because you want Puck to do a bunch of lemur-based animal work, I would push you to think more deeply about what the forest means in the play and to us now. On the flip side, if you’re doing Merchant in a 1980s shopping mall to riff on commercialism and “greed is good” culture, sign me the hell up. I think you’ve got something with legs.

What has/does Shakespeare mean to you? As a person—as a writer?

Every couple of years I have a new idea for a Shakespeare adaptation I want to write. My first real foray into playwriting was an exploration of Hamlet called Bad Hamlet that I co-wrote with my dear friend Lillian DeRitter. And I have this whole Tempest thing I want to do. Like I said’I think I keep coming back to Shakespeare because I find facets of myself there. And those facets change every few years, so there’s always something new to mine; some new aspect of the human experience to try and dig into, personally and artistically. I think as an artist, having good material to start from makes it that much easier to produce good material yourself.

When is the next Bard in a Bar?

Tuesday, March 13, 8PM, at Solo Bar! And you can keep up with future events by liking the Bard in a Bar page on Facebook.

How can one get involved in Bard in a Bar in the future? Are there volunteer opportunities?

Everybody is welcome and indeed encouraged to come and read! Trust me, you do not have to know anything about Shakespeare to participate. It’s a pretty streamlined process, but if people have resources like printing, props, photography skills, or performance spaces, I’d love to hear from them at bardinabar@gmail.com.