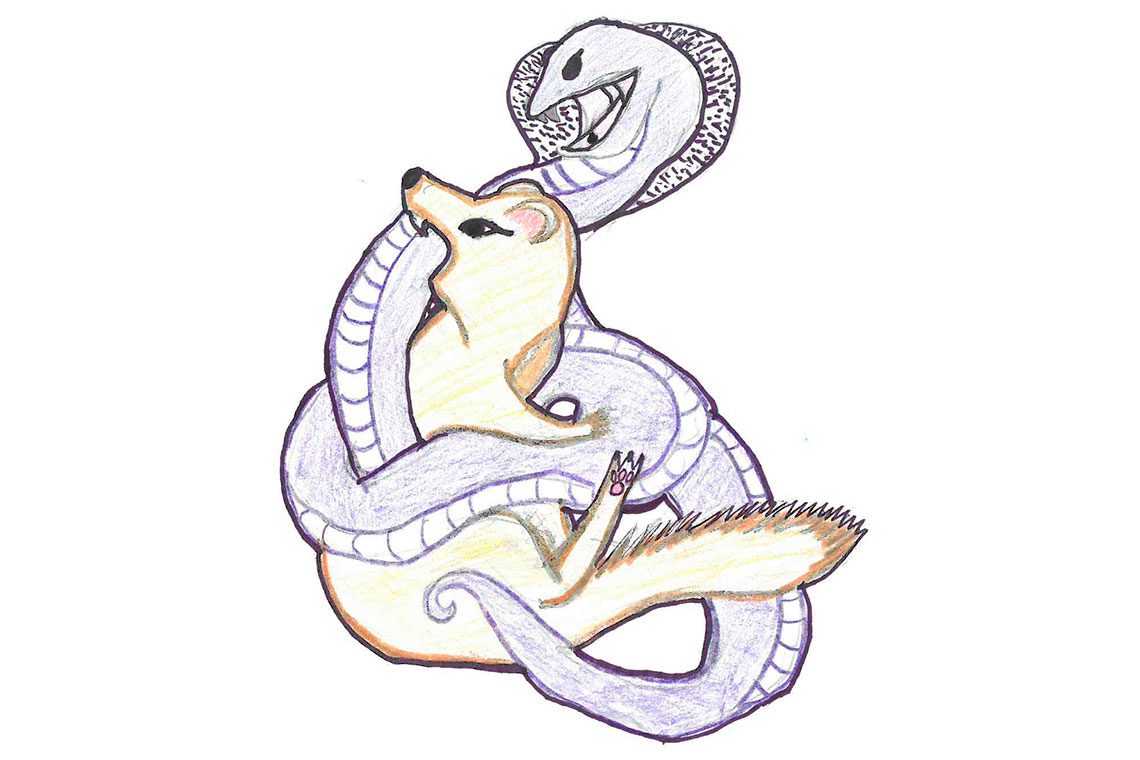 “Dad,” my eleven-year-old daughter says as we enter the theatre and find our seats to the sound of bird calls, “I think I might be the oldest kid here.”

She could be right. Little kids are everywhere. “Hmm, yes,” I say, consulting the program, “It looks like the show is for kids five and up.”

Waiting for the lights to go down, we read our Encore Arts program to learn a bit about the show before it begins. Based on the classic short story by Rudyard Kipling, the man who wrote The Jungle Book, it’s a story of friendship and cooperation in an Indian garden. There’s an innocent baby mongoose named Rikki Tikki Tavi, a vain bossy bird named Darzee and a befuddled muskrat named Chuchu who have to work together to rid the garden of their arch-enemy, the sneaky cobra Nag. By cooperating, they realize that friendship makes the garden a home.

After the show ended the cast signed autographs for the little ones.

What did you think?

I would rate the whole production four stars.

Who was your favorite character?

Darzee, because she has such a dramatic change from the beginning to the end. And, also, she’s really funny.

She was a good actor.

I wrote a poem about her!

Darzee
A poem by Grace Shipley

Purples, reds, oranges, greens, and blues swirl
together, flapping wings and selfish spirit.
Emotions spread across the feathers that
sway and beat in the wind. A dance of
difference occurs through every chapter.
What is this beautiful, strange creature.
It is a bird. It is Darzee.

I thought all the actors were pretty good. Didn’t you, kiddo?

The cobra was great. The actor put a lot of emotion and enthusiasm into it. And the muskrat was funny. The actor worked really hard at it and his funny voice was solid through the whole show. And Rikki Tikki Tavi, herself, was well cast. She was small, too. I liked that. It was a baby mongoose after all.

Do you know what the plural of mongoose is?

What about the costumes?

They were neat but I would have changed the costume for the muskrat because I couldn’t clearly see the character and I didn’t understand what it really was at first. But then he said he was a muskrat. So, that’s cool.

[We walked out into the lobby afterwards.]

So, even though you’re a little older than five, you actually didn’t mind seeing the show at all, did you?

But, I’m eleven, dad. Let’s hope I’m not the oldest one in the audience for their next show.

Don’t forget, kid. I’ll be one of the oldest in the audience for the next show. I’m 30 years older than you are.

But you’re an adult.

But with the heart of a child!!