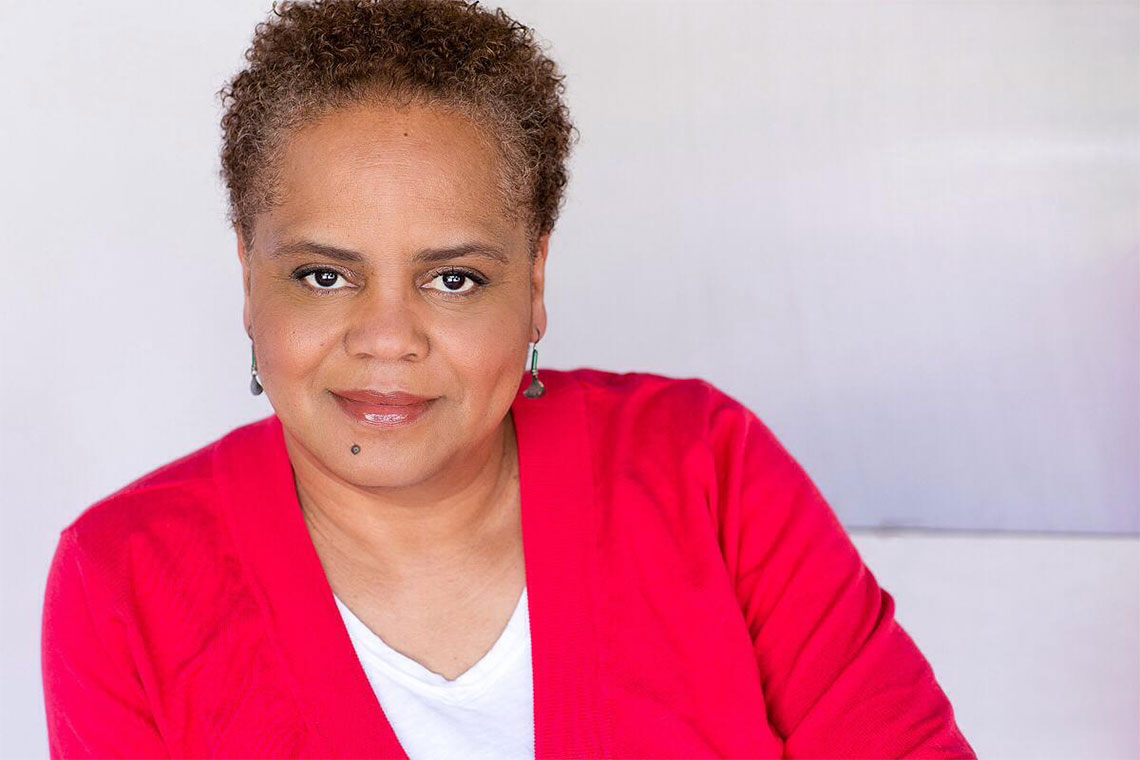 A couple weeks ago I read this article in the Washington Post about an amateur staging of The Mountaintop, a play about the inner life of Martin Luther King, Jr. on the eve of his assassination. The Kent State University production made the papers because its director cast a white man to play Dr. King. Controversy ensued. Playwright Katori Hall wasn’t having it; she called the choice “a disservice to not just Dr. King but the entire community” and added a new clause to her licensing agreement that stipulated that both characters be played by actors who are African American or Black.

Reading the article, I knew exactly who I needed to talk to about this latest controversy: Valerie Curtis-Newton. I’d interviewed her back in 2014 when she directed an ArtsWest production of The Mountaintop and she schooled me on matters of race in theatre, even specifically answering what I assumed at the time was a dumb question: could The Mountaintop be cast non-traditionally, with a white actor? (Short answer: no.)

Curtis-Newton is no stranger to the complexities of race and identity in casting; her staging of Arthur Miller’s All My Sons with an all-black cast at the Intiman was praised for bringing a new depth to the play, and she’s the director of the Hansberry Project, a theatre lab that gives primacy to the black voice and perspective. Currently she’s directing The Motherfucker with the Hat for Washington Ensemble Theatre (running at 12thh Avenue Arts through February 1), a play that’s also seen productions criticized by its playwright for casting choices.

Curtis-Newton speaks with clarity and a wealth of professional experience on these matters. In our previous interview I promised that the next time I talked to her it wouldn’t be about some problematized racial situation in theatre. “You lied,” she teased. Nevertheless, she helped me navigate the prospect of a white MLK.

When I came across this article in the Washington Post I had to get your take on it because it’s something we talked about very specifically when I interviewed you last time. What was your first reaction?

It complicates it that it’s a director of color, yes?

It complicates it on several counts, not the least of which is that it’s a historical play and the playwright’s intention was to climb inside the heart of that historical character. It wasn’t about testing out any other themes; it was about what goes on in the mind of an MLK. So that was problematic for me, and I didn’t understand the director proceeding without the playwright’s consent for such a largely experimental concept.

My first thought was why? What’s the point?

I can’t tell you how many productions I’ve made of plays by black playwrights that were written with black actors in mind where, once the show ran, people came up to me and asked, “Could this have been done with white people?” It’s a common occurrence. We’ve conflated universal themes with universal experience, with universal specificity. That you and I can both understand loss doesn’t mean that we’ve experienced the same loss.

It seems like the director [of The Mountaintop] was trolling everyone. It’s almost like that reaction you get from anti-Black Lives Matter people who say, “Why do you even have to see color?”

Yeah, I think that it is this sense that there should be a kind of quid pro quo. “If you, actor of color, wanna be nontraditionally cast in roles that belong to me as a white person, then I should be able to get roles that are written for you. If I’m giving up something I should get something back.”

The problem fundamentally is that many times in plays that are typically cast with white people, white isn’t explicitly what’s required to execute the role. The neighbor, the friend—the world of the play can be more diverse when the themes aren’t explicitly about race or when we can play it in a color conscious way, utilizing race to our advantage.

Can you characterize the director’s relationship to the author? Obviously Katori Hall opposed this and had the actual play amended. That’s probably a note she never thought she’d have to make, to say the role of MLK was intended for a black actor.

When I nontraditionally cast All My Sons for the Intiman, we got the permission of the Miller estate. I didn’t just pull off and say, “Let’s do it” and not check.

Do you always respect the playwright’s wishes?

I think it’s my job to try to interpret what the playwright has written and to envision a production that lands the thing the playwright was interested in landing. I might find new ways to do that or ways that are different than you might do, but I’m still going for what the playwright’s intention was. In the case of The Mountaintop, there really wasn’t any concern for what Katori was interested in. It’s not like he did something experimental to try and get more at the same things, he wanted to get at something completely different.

I think so. There are directors who are interpretive and directors who are auteurs. When you are operating as an interpretive director then you really have to be concerned with the playwright’s intention: what they hope to accomplish, what questions they hope to raise for the audience. When you’re an auteur director you can pretty much do whatever the hell you want, but it has to be your material or it has to be in the public domain. And so knowing what kind of director you are and what kind of work you’re performing gives you the guidelines by which to create a concept for elucidating the things in the play.

Having just directed this play, you seem fairly placid about it. Was there a huge eyeroll when you heard about this production? Were you pissed? Agitated?

No. I am old enough now to recognize that people are gonna do what they’re gonna do. If I was the playwright I’d have been be pissed as hell. As another artist, people make what they make and then they take the consequences for having made it. For me, that’s what being an artist means. So this director made a choice. I think it was a sucky choice, a bad directing choice, but getting mad about it—that’s not what it’s about.

I wouldn’t get any more mad about it than I’d get about The Mikado’s yellowface. They can make that play if they want to. And the audience, the community, has a right to its response. I don’t believe in censorship in that way, so I can have feelings but ultimately the deal is that it awakened Katori to what is really on the page and a community had a response to it that the director and the producers felt. They won’t do that again. That’s the right way to solve these things, for everybody to stay in their lane. In this case the director got out of his lane and started to be a playwright.

But this also gets at the broader issues of inclusion and the Black Lives Matter movement. It feels counter to that movement. Does it hurt, sending these mixed signals? To me it felt like “All Lives Matter” in theatre form.

If I’m really honest, ultimately this was just same shit different day. I can’t open a vein every time someone gets it wrong, because we don’t live in a place where most of the time people get it right.

So you doing what you do is your affirmation of what you believe.

I do what I do and I have an opinion. I share my opinion—I’m sharing it you. I work with people who want to not go down that path. I try to help educate people who don’t understand why that path could be problematic. But I wouldn’t say absolutely “you can’t do that” because that’s not the forum for artists. The sacrifice or the censorship of artists and the right to make, quite frankly, offensive shit is still important. I want to hold onto that because at some point someone will want to use it against me.

Which gets at the heart of this bigger discussion: “The ‘PC Police’ are silencing us! I’m not allowed to talk about race because I’m white!”

Sometimes I do feel like the ACLU defending the Klansmen in Skokie. But without that defense, Black Lives Matter wouldn’t be able to happen.

See Washington Ensemble Theatre’s The Motherfucker with the Hat at 12th Avenue Arts through February 1.