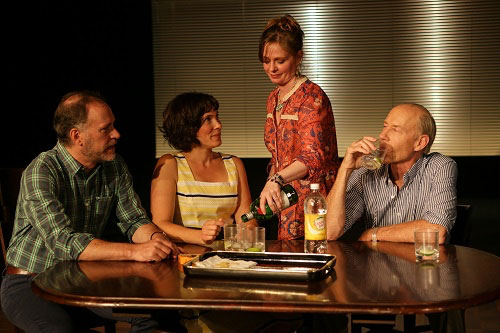 I’ve read Raymond Carver in a variety of life situations over the years: in the library of a small college on the northeast coast of Florida, in a shabby apartment above an upholstery shop in the Blue Ridge Mountains and finally, beneath the melancholy clouds of Washington, the state he called home for the last decade of his life. I styled my twentysomething self in the mold of a Carver protagonist: broke, rootless, unlucky in love, a drinker. I liked Carver’s terseness, his knowing resignation, the way he treated working class people with delicacy and humanity. I was struggling to get by with a string of blue-collar jobs but I had higher artistic aspirations, just like ol’ Ray.

Though it’s been years since my last Carver binge I’m a lifelong fan, so I had to see Book-It’s What We Talk About When We Talk About Love, an adaptation of four short stories that was one of the theatre’s first productions back in the early 90s. I might’ve had doubts about their ability to tackle such a familiar, distinctive authorial voice but I’d last seen Book-It’s Slaughterhouse-Five and enjoyed it to the depths of my Vonnegut-loving soul.

Of course, What We Talk About is as far as you can get from the time-travelling, war-torn, galaxy-spanning Slaughterhouse, so I was interested to see how they applied their patented adaptation process to this handful of small, intimate stories. They pulled it off. Here are three things Carver fans will love about the show (which closes this Sunday).

Carver has a keen ear for plain speech pushed to extremes. Hearing words spoken out loud that I had only previously read on the printed page opened up a new sense of the music in his undersold dialogue.

Carver had a knack for steering idle talk into conversational minefields, injecting menace into casual exchanges with acid asides and retorts. In the titular first act, Kevin McKeon’s tipsy Mel threatens to derail the boozy get-together with bursts of anger and inappropriate flirting. You’re put on edge, waiting for it—and him—to fall apart completely. It’s a dynamic familiar to anyone who’s spent much time around alcoholics—Carver was one—and the first act nails it.

Carver can work it the other way, too, plucking comedy from sadness and anger. In “The Student’s Wife,” Carol Roscoe rages incandescently at her ex-husband, played by McKeon, and he narrates deadpan: “Make no mistake: I feel I’m home.” It’s the biggest laugh of the show, arising out of a moment of fury.

Likewise in the first act’s story of Terri’s doomed ex, each new revelation she and Mel share about Ed’s downward descent into stalking and madness—guzzling rat poison, botching a gunshot to the head—lands like another punchline, wringing laughs out of the blackest possible circumstances.

Reading Carver as a Very Serious Young Artist in my twenties, it was all about the thwarted fortunes of down-at-heels men sitting alone at kitchen tables lighting cigarettes and cracking open bottles of gin. Seeing the stories manifested onstage, I realized that my earnest youthful humorlessness caused me to miss out on plenty of zingers.

The show ends on this perfect little jewel of a story, one of the best ever written. Though Carver denied it was intended as a metaphor for making art, it’s impossible not to find parallels. Placing our perceptions in another’s hands, giving form to contours previously only dimly perceived; this is the work of both the writer and the theatre artist. “Cathedral”’s stoned, late night epiphany about the possibility of human connection resounds onstage as it does on the printed page: clear and joyful. It’s a dual testament to what Book-It does, show after show, and to the power of Carver’s work.