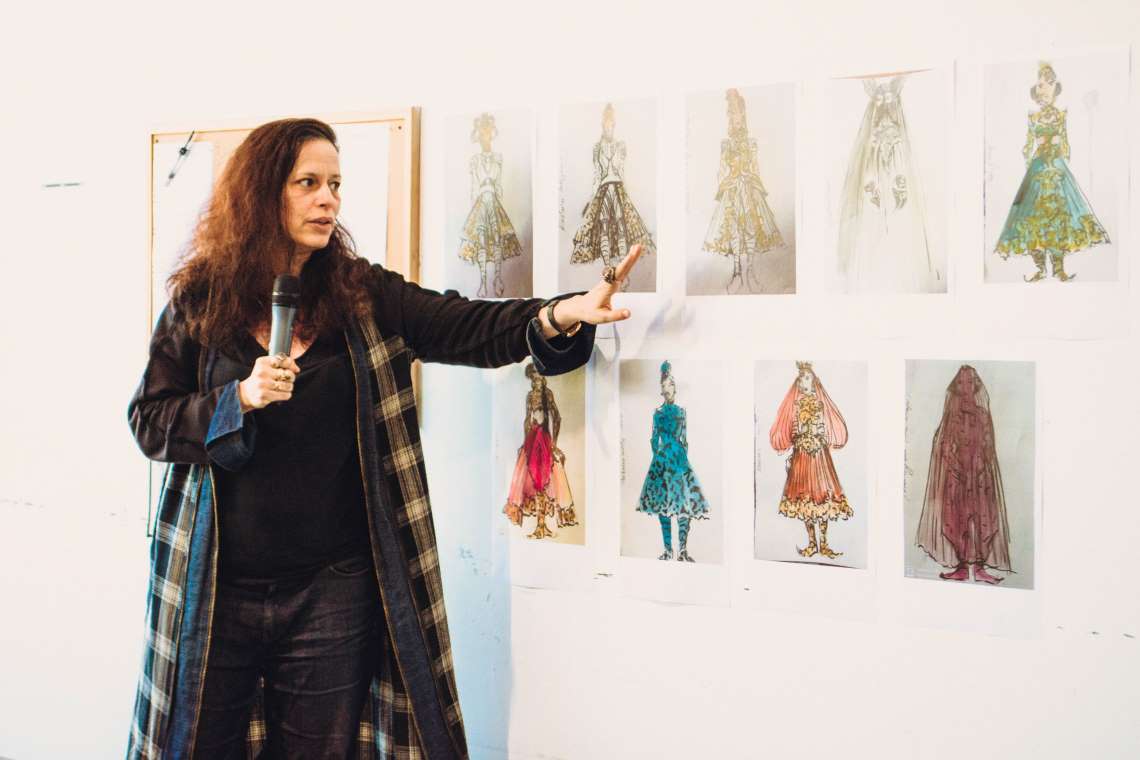 Costume designer Oana Botez discussing her ideas on the first day of rehearsal of 'House of Joy.' Photo by Zhanara Baisalova

The journey from words on paper to action onstage is not a fast or simple one. Playwright Madhuri Shekar and Director Megan Sandberg-Zakian prepare for the world premiere of House of Joy at Cal Shakes and share with us how they developed a “swashbuckling action-adventure romance, set in 17th century India” to the stage.

When Madhuri Shekar and Megan Sandberg-Zakian arrived in Orinda, California last month to start rehearsals for House of Joy at California Shakespeare Theater, they were already pretty familiar with each other. Earlier this year, when Audible commissioned Shekar to write an audio play as part of their Emerging Playwrights Fund, Sandberg-Zakian came on to direct. The result was Evil Eye, a play told entirely through phone calls between a millennial named Pallavi and her mother, who desperately wants to see her daughter marry.

Despite being two different plays in two different forms—Evil Eye is contemporary and meant to be listened to on headphones, House of Joy is a period piece staged in Cal Shakes’ outdoor theatre—there are some striking similarities.

“They’ve both involved some degree of combat,” Sandberg-Zakian said, adding that she hired a fight choreographer to stage Evil Eye’s pivotal fight scene so that the team knew what that moment could sound like. “There’s also a really cool relationship between badass women fighting evil villains in both of these plays.”

And despite both plays living in completely different genres—House of Joy is a swashbuckler—Shekar noticed some overlap in theme in her own writing. “Both Evil Eye and House of Joy have, like, these undercurrents of domestic and intimate partner violence,” Shekar said. “Which, you know, that’s not really my thing.”

To say that any one theme is Shekar’s thing would be an incredible disservice to the worlds she creates. Queen, which premiered at Victory Gardens Theater in 2017, explores scientific ethics in the face of ecological disaster. In Love and Warcraft considers real versus imagined worlds, using World of Warcraft as a lens. And A Nice Indian Boy, which premiered at East West Players in 2014, navigates queer relationships in Indian families. And that’s just the tip of the iceberg.

A moment later, she admitted that she used to be in marketing. “I don’t ever want to do marketing ever again,” Shekar said. “But I think communicating what the story feels like is very important.”

House of Joy has a dense development history, beginning with a reading at the Atlantic Theatre Asian American Mix Fest in 2017, continuing on to a workshop production in the Juilliard New Play Festival later that year, and various readings, workshops and showcases at Pratidhwani, New York Stage and Film, South Coast Repertory and the Bay Area Playwrights Festival.

“There’s been lots of readings,” Shekar said. And while each opportunity for House of Joy has been beneficial in its own way, Juilliard definitely stands out as a highlight. “The Juilliard production was huge because we did it with a $200 budget or something like that,” Shekar said. “And it was seven actors who were student actors in a classroom. I wrote an impossible play—deliberately—just to see what was going to happen. And seeing that the play could function in that very limited setting, and communicate the story to the audience, was just very affirming.”

Another major step forward for the play was the Bay Area Playwrights Festival, produced by Playwrights Foundation in San Francisco. That’s where Shekar received a production offer from Cal Shakes.

“You don’t actually learn that much from readings,” Shekar said. “You learn something, but you don’t learn that much, especially with a play like this. What incentive do playwrights have to really, really push themselves if they don’t know what that reading is for, you know? Whereas if you had a production, oh my god, look at this crazy huge incentive to make the play the best you can be. You know?”

And that’s when Sandberg-Zakian came on board. Together they organized a workshop in New York with Cal Shakes in mind. A few actors from that workshop continued on to the production. “A lot of actors, and other directors too, have touched the play and really contributed to its development,” Sandberg-Zakian said. “But it’s been great having a mix of people who were familiar with other drafts and people who aren’t because we can get some fresh perspective. And also they’re just really, really smart. And the actors’ brains have been just instrumental in figuring out some of the play.”

When I spoke with Shekar and Sandberg-Zakian, House of Joy was undergoing significant rewrites. “I just have so much admiration for new play artists,” Shekar said. “Actors and directors and designers—people who understand how insane it can be on a world premiere with things changing around you. Everyone’s been really game.”

One thing that Shekar learned during the research for House of Joy was that in 17th century India, the women of the harem were female bodyguards. Building out that rich world has been a particularly joyful experience for this team.

“There’s a scene where the bodyguards are basically doing a training exercise,” Sandberg-Zakian said. “And because it involves a whole bunch of people who aren’t actually there—if there are fifty bodyguards and we only have three of them on stage—there can be things happening that real human bodies couldn’t actually do. Madhuri wrote that somebody does a back flip. And it’s an invisible person. So, everyone’s watching. Their eyes are following them—‘Ohhhhh!’—and they’re watching this person land. It’s super fun.”

Shekar and Sandberg-Zakian are both looking forward to staging this play in Cal Shakes’ outdoor space. “You have the rolling hills in the background; sometimes there’s like cows that wander by and moo at you,” Sandberg-Zakian said, painting a picture of what she has to look forward to during tech rehearsals. “There’s a real sense of journeying in that space. You feel like you take a journey to get there, even though it’s ten minutes from downtown Berkeley. You’re just in another world where things seem more possible.”

And the outdoor setting has dramaturgical support behind it as well. “If you look at photos of the harems of Mughal India, they are mostly outdoors,” Shekar said. “There are bedrooms inside, but most of the communal spaces are out—loads of fountains and gardens. They called them houses, but they’re really like gated communities. So, having the play happen outside is really great.”

We could have talked for hours about the stage combat and the importance of having so many women of color on stage—together—but Shekar and Sandberg-Zakian had a rehearsal to get to. There were new pages to rehearse and some swashbuckling to fine tune.

“It’s going to be like nothing you’ve ever seen in the American theatre,” Shekar said. “I can promise you that.”

Danielle Mohlman is a Seattle-based playwright and arts journalist. She’s a frequent contributor to Encore, where she’s written about everything from the intersection of sports and theatre to the landscape of sensory-friendly performances. Danielle’s work can also be found in American Theatre, The Dramatist and on the Quirk