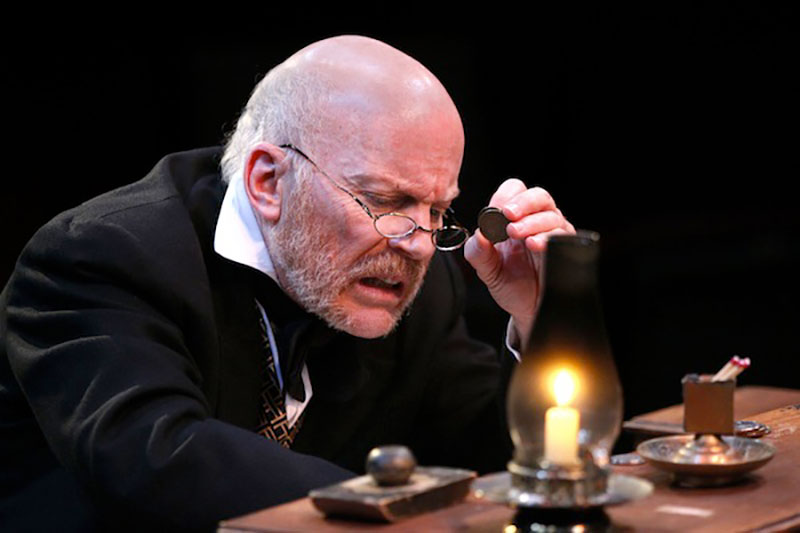 “The cold within him,” Charles Dickens wrote, “froze his old features, nipped his pointed nose, made his eyes red, his thin lips blue, and he spoke shrewdly in his grating voice.” That could be none other than Ebenezer Scrooge, the cold-hearted, miserly misanthrope at the center of Dickens’ beloved A Christmas Carol. Peter Crook’s nose isn’t pointed. His eyes aren’t red. His lips are not blue. His voice is rich and resonant. He is an actor though, a long-time fixture in Seattle’s theatre community, so it’s not hard for him to transform into Scrooge most every night this holiday season in ACT’s A Christmas Carol.

That’s not to say Crook doesn’t have big shoes to fill. He does. It is Ebenezer Scrooge after all. On screen the character has been played by the likes of Alastair Sim (Crook’s favorite interpretation), Basil Rathbone, Albert Finney, George C. Scott, Jack Palance, Patrick Stewart, Michael Caine and Jim Carrey, and that’s just a handful of the actors who have been visited by the ghosts of Christmas past, present and future. There are also the actors who came before Crook at ACT. A Christmas Carol has been going on strong at the theater now for 38 years.  Currently, Crook is sharing the role with ACT’s artistic director Kurt Beattie, who has not only played Scrooge before but has directed ACT’s production of the holiday favorite in the past.

“I can only do it as I can do it,” Crook says. “I have my own life circumstances; my own theater training; my own passions and understandings of life. That makes Scrooge my own.” He talks of the first fitting during rehearsals, trying on coats and hats and frocks that had been worn by Scrooges gone by.  A few Seattle acting legends who have put on those coats, hats and frocks include David Pichette, R. Hamilton Wright, Jack Clay, Sean Griffin and the aforementioned Beattie. With only a three-week rehearsal schedule, the big shoes need to be filled quickly, the coat needs to be quickly thrown over one’s shoulders. “With each performance it’s as if you’re saying the words for the first time. That’s challenging. That immediacy. That need to keep the play newly minted each time.” Crook, now 56, is up to the task.

His acting credits are long. He played Dorn in The Seagull Project’s The Seagull. He’s been in ACT’s Mary Stuart, Book-It Repertory Theatre’s Cider House Rules, and Intiman’s Angels in America. He’s been on Broadway as Mozart in Amadeus and on TV in “Designing Women.”

“It’s a great story,” he says of A Christmas Carol and why it still resonates with us a century and a half after it was written. “It’s full of hope,” he says. “There’s redemption. There’s a reclamation of spirit.” If joy can touch Scrooge, joy can touch us all. “Life is not singular,” Crook continues. “It’s not to be done alone.”

Of course, A Christmas Carol isn’t done by Scrooge alone. The cast and crew bring the story to life every night in the round—Scrooge, the ghosts, Fezziwig and all the rest. Crook hopes it’s a meaningful Christmas tradition for audiences. “Traditions,” he says, “are powerful.” Traditions, he says, “are who we are.”