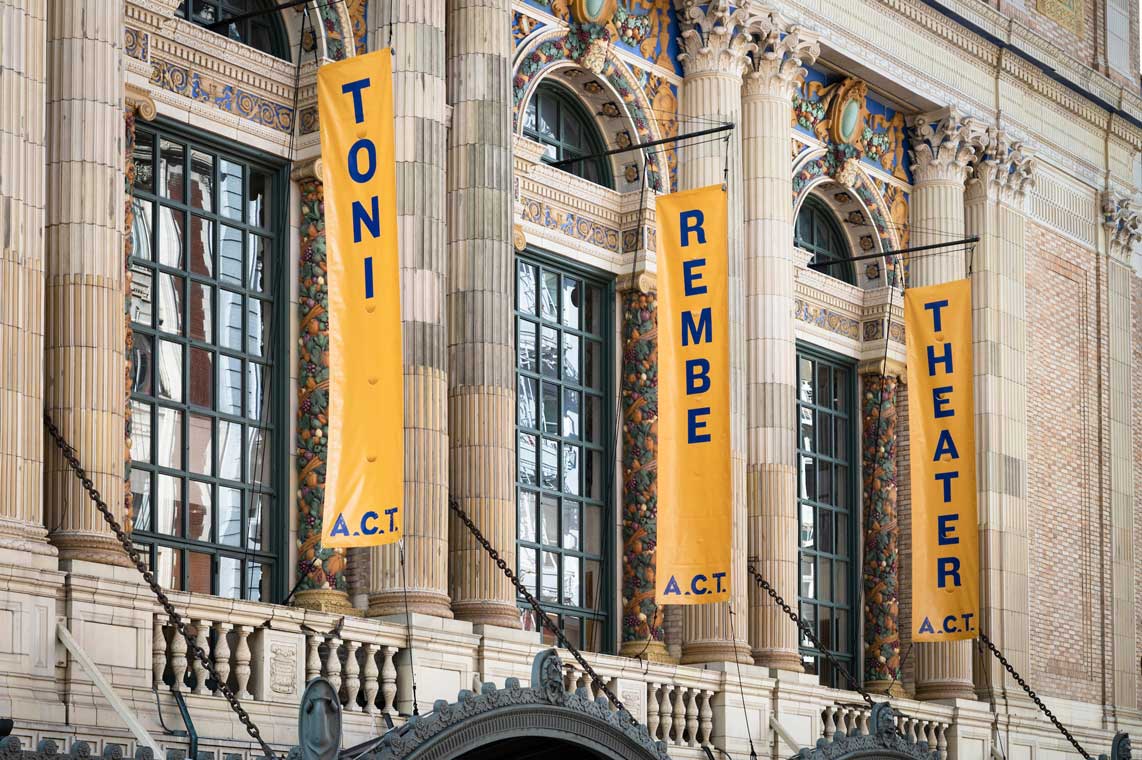 The exterior of the newly named Toni Rembe Theater. Photo by Kevin Berne

The American Conservatory Theater (A.C.T.) has renamed their historic Geary Theater to Toni Rembe Theater. The change comes after the San Francisco organization received a $35 million donation from an anonymous donor in honor of Toni Rembe.

This donation is the largest single gift that A.C.T. has ever received. To celebrate this unprecedented contribution, American Conservatory Theater has decided to dedicate the former Geary Theater to Toni Rembe, a San Francisco Bay Area arts philanthropist. Rembe currently serves on the Board of Trustees of American Conservatory Theater and is a past President and Chair. Rembe has also served on many other boards for social justice and the arts. She is president of the van Lӧben Sels/Rembe Rock Foundation, a private foundation specializing in the promotion of social justice through legal services and advocacy

“We are deeply grateful to the generous donor for this extraordinary gift,” said Executive Director Jennifer Bielstein. “The funds provided are transformational for the future of American Conservatory Theater and the impact of our programming throughout the San Francisco Bay Area. Toni is a role model, and we are honored to recognize her in such a deserving and significant way. The Toni Rembe Theater will forever serve as a reminder of Toni’s decades-long contributions to the arts community.”

The $35 million donation will help protect A.C.T. for future generations. This money is especially critical during a time when supporters and audience members are still slowly returning to the theater after ongoing times of uncertainty and hardship. The gift will also be used for improvements to A.C.T.’s theater venues and an increase in accessibility to performances and programming.

Artistic Director Pam MacKinnon added, “Toni Rembe has been central to the health and well-being of the Bay Area theater scene. Her wide-ranging artistic taste and appreciation of artists and the special act of audiences coming together for a story make her a true theater lover. Her generosity and commitment to Bay Area culture and artmaking is unparalleled. Toni’s involvement with A.C.T. has been historic and long-reaching. She has served as a member of A.C.T.’s Board of Trustees for over 20 years, including stints as Board President and Chair. She was also on the search committee that brought me to A.C.T. I am profoundly grateful for her stewardship and love of theater in her chosen city of San Francisco.”

You can view American Conservatory Theater’s current season on our website.